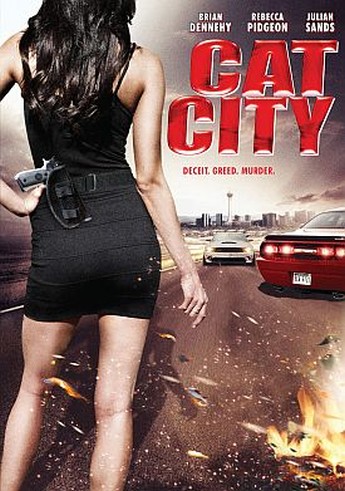 Victoria Compton (Pidgeon) suspects husband Nick (Sands) of having an affair, and her suspicions are confirmed when the private-eye she hired delivers pics of his infidelty. Worse yet, he turns out to be cheating on her with a colleague (Huff) at the law firm where she works. However, she can’t confront him about it, as their house is now home to an unwanted if attractive guest, Jonas McCaw (Massi). He has been foisted on them “for a few days” by an influential business partner of Nick’s; interestingly, Nick has to go to Las Vegas on urgent business, trying to shore up a project to build a massive casino project on tribal land in the California desert. When he comes back with a suitcase containing millions of dollars, and she discovers that Jonas is not who he claims to be, Victoria has to decide exactly where her loyalties lie, what she needs to do about them – and, what the entirely-misleading DVD sleeve has to do with any of this.

Pidgeon is best known as Mrs. David Mamet, having appeared in a number of his films, and this seems to be aiming for somewhat similarly, twisty territory. However, the script is nowhere near in the same category, failing to have Mamet’s lyrical ear for the English language, and sense of plot construction. Too often, the dialogue hears comes over as stilted and artificial; while this may be partly deliberate, with just about everyone in the movie lying to each other about most things, it still seems forced and unnatural. The film also takes too long to set up the various pieces – and what’s with the five million shots of wind turbines? Ok, you’re shooting in Palm Springs. We get it. When they are finally put in play, during the second-half, things do improve, and both Sands and Pidgeon deliver the kind of reliable performances that aren’t too jarring to watch. It’s not awful, but in a genre that’s already been done to death, your execution needs to be more than forgettable.