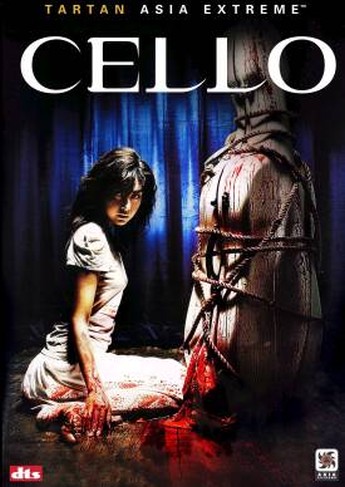 This is probably more satisfying after you’ve watched it, then while you do so. It’s hard to say why, without spoiling the film entirely, because it is, basically, a bit of a cheat. For example, some important stuff about the heroine (Song) is deliberately held back from the audience for a good hour: not only is this not being straight with the viewer, it probably would have helped the film. It’s one thing to think, “That’s creepy”; quite another to recall later, “Remember that scene from thirty minutes ago? In the light of what we know now, that’s creepy.” Mi-Ju (Song) is a music theory teacher, whose life is crumbling about her: a student has a grudge; her sister goes crazy; a creepy, mute housekeeper is now employed in her hourse; and while her autistic daughter is inspired to take up music, her instrument seems to have brought an evil presence into the house. You will be unsurprised to hear that it’s not long before Mi-Ju’s sanity starts to crack at the edge too.

Truth be told, it takes too long to get going, concentrating on teasers and character set-up which are overplayed. If these were particularly deep or interesting, it might be necessary, but since the film holds back on the meat about Mi-Ju, it’s mostly a waste of time – the peeved student thread, in particular, peters out into nothingness during the second half. However, once the film opens up a bit, the impact of events gradually becomes more pronounced, and there’s one moment – it involves a cello and a bed – which provides a greatly unsettling moment of realization. Beyond this, there is a twist that kinda works, but kinda doesn’t, in the sense that the film ends, just when it’s about to get really interesting.

That twist might have been more effective an hour earlier, though I admit this would have turned the film into a knockoff of a certain American horror film. As a result, this one must be placed into the box marked unrealised potential. It plays around the edges of doing something different with the genre, but ends up falling back on the old staples of Eastern horror such as the possessed object, the long-haired ghost girl, etc. As a result, while there are individual scenes that will certainly stick in your memory, the movie as a whole is less likely to leave much of an impression.