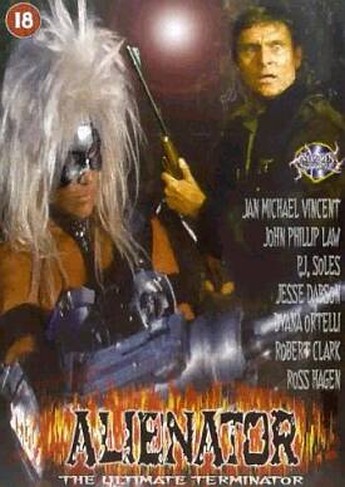 When condemned extraterrestrial criminal Kol (Hagen) escapes, he heads straight for Earth and is mown down by a Winnebago driven by Rick (Law) and his friends, on their way for a weekend getaway. With the help of a park ranger (Law), they take the ET aboard. But chasing him is the Alienator, an androgynous android unleashed by Vincent in his role as outer-space prison warden. Fortunately, retired Colonel Coburn (Leo Coburn) is nearby; he still has some “souvenirs” from his army days, and we’re not talking snowglobes and picture postcards, if you know what I mean. Other Ray regulars, like Dawn Wildsmith and the ever-reliable Jay Richardson, fill out the cast, along with P.J.Soles (Halloween), and are better than this deserves.

For, unfortunately, it is really not very interesting. Obvious inspirations, Pred– and Termin-ator, created an unstoppable nemesis, relentlessly harrying its prey at every step. Alien– has a female body builder in a fright wig, who can’t shoot straight – much like the prison guards, incidentally. And with such a small cast, the body count is unimpressive; we get one full-body burn, which doesn’t actually make sense – everyone else the Alienator hits (usually after several attempts, her misses causing minor pyrotechnics) just evaporates. Which does, at least, save money, clearly a major concern here. However, how expensive is some Karo syrup and a bottle of red food colour? And for something directed by the man who once famously called nudity “the cheapest special effect”, even this aspect is downplayed. What’s left is basically family-friendly SF-horror, and is about as fun as that sounds.