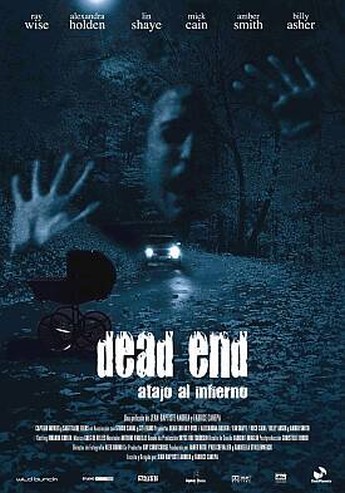 This is an unexpected little gem; it initially seems like just another rural nightmare, yet takes the “road ghost story” urban legend and turns it into a nice, tight cinematic treat. The Harrington family are on the way to see relatives on Christmas Eve; however, the Dad (Wise) takes a shortcut, and on a remote road going through a forest, they encounter a woman dressed in white. After they try to help her, things start going horribly wrong, and they can’t get off the road, as it seems to have no end – or even turnings. In addition, a great deal of dirty laundry is aired as things fall apart and, apart from the woman, the only other sign of life is a mysterious black car. This seems to be able to appear and disappear at will, and its arrival always bodes ill.

This pushes almost all the right buttons. Between the scripts and the fine performances, the characters are plausible and engaging, the dialogue realistic and entertaining, and the ongoing storyline builds tension effectively, with no small degree of intelligence. Certainly, the ending is a little less effective – if you called it a cop-out, I’d politely disagree, but wouldn’t argue with you – though my disappointment was mostly because the preceding 80 minutes was near-perfect. Otherwise, my only complaint was too much restraint: when the characters are staring at something in abject horror and distress, you want to see exactly what it is they see, not a mere hint. But the less I say, the better. We came in knowing almost nothing and found ourselves sucked in to the mystery along with the victims. I’ll happily bet that ten minutes will be enough to get you completely hooked as well.