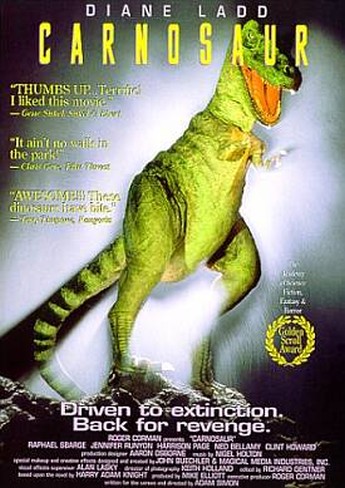 [14] I recall reading Carnosaur and thinking it’d be a wild film. This Carnosaur isn’t great. Probably not even good. However, it’s just what you expect from Roger Corman: exploitation (“This’d make a great theme park”, says one character – we also note the starring role given to Ladd, Laura Dern’s mother!). It’s an anti-JP; a couple of wobbly dinos rather than herds of impressive ones, more blood, and a happy absence of whining brats. Similarly dumb plot, tho’; Dianne Ladd wants to turn chickens into dinosaurs and wipe out mankind. Adam Simon did the other Brain Dead; this isn’t as strange, but no matter how cheap and stupid it got (“very” to both), I can’t truly hate a film which shreds eco-freaks.