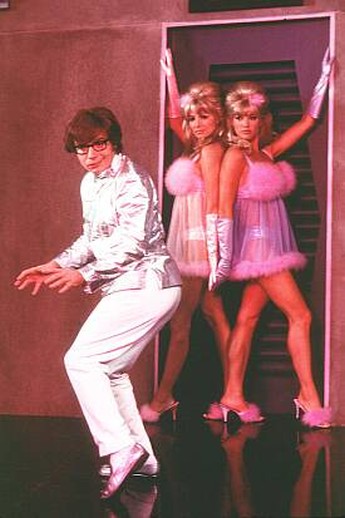 Something of a pleasant surprise, this. I’d avoided it initially, because the trailers left Mike Myers’ defrosted agent looking like an obnoxious twat with no redeeming features, but there actually is more to it than taking the mickey out of the 60’s [let’s face it, not exactly a taxing task]. What works are the delightful characters round the fringe (notably Dr. Evil, also played by Myers, who is just as much out of the loop as Powers, with regard to 90’s culture), plus parodies of Bond, Flint, and just about any other secret agent you can mention.

Most of the supporting cast – the above, plus Mimi Rogers + Charles Napier – all seem to be having fun too, so despite an utterly forgettable Liz Hurley, and the odd element that is perhaps in dubious taste (the jokes about Evil’s horribly burned henchman fall flat), it’s got enough good moments in it to easily carry the day.