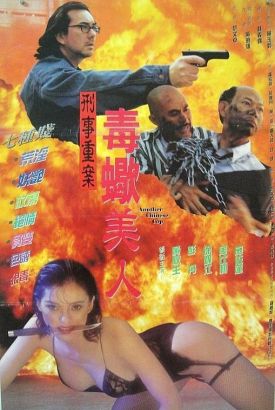 Not one of Anthony’s best, not least because his role here seems almost pointless, and his cop does little more than hover in the background. The focus of the film is really his colleague Elvis Tsui, who is friends with martial arts superstar Billy Chow and his night-club singer fiancee, Diana Pang. To cover the medical bills of Pang’s mother, the last two kidnap a millionaire (preceded by Pang’s entirely gratuitous strip-tease, which puts Jamie Lee Curtis’s in True Lies to shame), only to find themselves falling deeper into crime, pursued by their erstwhile pal.

The movie starts off like a Stephen Chow comedy, then flirts with Aces Go Places for a bit, maybe thanks to Tsui’s baldness, but is largely ineffective in either role. Towards the end, it does eventually find its footing, perhaps closer to Natural Born Killers than anything else, since you can understand the reason for the tragic couple’s actions, if not condone them. The only interesting twist is when they decide to wreck the life of her former boss in the nightclub, framing her for murder. This idea could have been developed further; sadly, it’s rapidly discarded in favour of the obvious and formulaic finale.