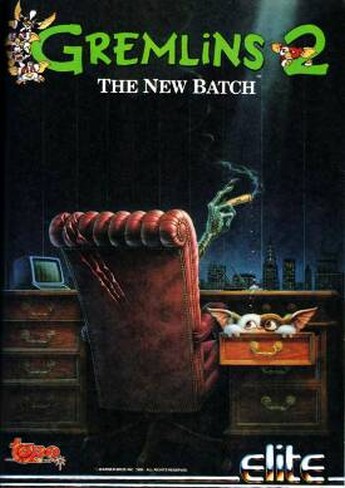 The sequel is more effective than the original, simply because there’s no need to waste time laying out the rules, and the satire during the setup makes effective stabs at big business, corporate culture, mad science and crap cable TV. In itself, this would be more than amusing; the film then explodes into a blizzard of pop-culture movie references as the Gremlins take Manhattan, covering everything from the obvious (Batman and Rambo) to the obscure (Marathon Man, Kiss of the Spiderwoman and Dr. Quatermass). This is highlighted by Tony Randall as the “brain”, who discusses the meaning of life and what his species wants from it, before pulling a gun, and shooting a fellow Gremlin in the face: “Was that civilized? No. Fun: certainly.”

All over the place? Utterly. Nonsensical? Without a doubt. Yet the film is cheerfully aware of its own lunacy, playing with the conventions of genre, and cinema in general, delightfully. Things even grind to a halt as Gremlins invade the projection-booth, and only a rant from Hulk Hogan restarts proceedings. Genetic splicist Christopher Lee steals scenes among the human performers, parodying his own history as a horror movie icon, but it’s clear that everyone involved is having a lot of fun with their roles, and the imagination present is clear. Unquestionably as self-indulgent an exercise as you’ll ever see, it requires the viewer to go along, or be left absolutely flailing in the dust. It’s worth hanging on for the ride.

What we said then. [7] Incredibly cute, awesomely cuddly and impossible to resist taking to bed with you. But enough of Cates, what about the movie? Like all sequels, it attempts to be bigger than the original and certainly succeeds – no more smalltown America, Mogwai is in a New York genetic lab at the top of a skyscraper and before you can say ‘bright lights!’ (in a high-pitched voice), he’s had a shower and exploded into thousands of you-know-whats. Courtesy of the genetic lab, they rapidly mutate to produce bat-lins, brainy-lins and even a fem-lin and then things start to get really silly, culminating in a large musical number in the skyscraper foyer. Galligan and Cates return as the stars, but yet again the FX win; jaw-droppingly effective. And add Christopher Lee, too many film jokes to mention, office satire and Bugs Bunny. Awesome. 8/10