This takes place over the course of one day at a car dealership in Phoenix. The boss, Malcolm Chamberlain (Mulkey), is a real bastard, who is on the verge of setting up a new location, yet needs to show he has $300,000 in liquid assets to clinch the deal. Doing so requires sketchy business practices, such as withholding his salespeople’s cheques. His son, Mark (Adams) isn’t happy, and wants to run the new franchise on more ethical lines. Dad makes him an offer: sell a record number of vehicles by the end of the day, and Mark gets the dealership. Otherwise, it’ll go to his hated rival, Mike Reynolds (Hopkins). Yet Mark has other issues, not least a disintegrating relationship with his wife, Ashley. 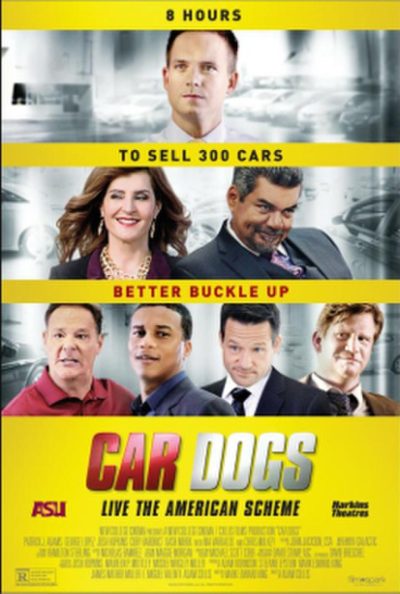 The obvious inspiration is Glengarry Glen Ross, something the film explicitly acknowledges at one point, when a salesman re-enacts one of its speeches to an unwitting newbie. It has much the same sentiment of people being pushed into morally grey areas for personal gain, and you’ll probably come out of this never wanting to set foot in a car dealership ever again. To say it doesn’t paint a flattering portrayal of salesmen, is like saying Schindler’s List fails to depict Nazis in a good light. Even Mark doesn’t come out smelling of roses, since he’s basically a big pussy, under the thumb of his tyrannical father, and is emotionally dead in terms of his marriage.

The film works best in its supporting characters, and there’s no shortage of these. A couple should be recognizable: George Lopez and Nia Vardalos are crafty veterans Christian and Sharon. The script does a decent job of drawing them and their colleagues efficiently, giving these ancillary individuals traits and goals. Some are arguably more interesting – and certainly sympathetic – than the leads. While it’s not essential to like a movie’s hero, there has to be something onto which the audience can hook. I didn’t feel it gave us that for Mark. His supposed belief in moral business practices, feels at odds with many of his actions over the course of the day, as he pushes his employees toward the sales target.

It was nice to see some Phoenix landmarks, such as Camelback Mountain, rising in the background behind the company’s premises [Chris reckons it was an abandoned car dealership at 52nd St and McDowell. She also used to work with the woman who plays the receptionist] The director was a film professor at Arizona State University, and it seems to have had quite the hand in proceedings, with students from its film school working on the production. I’ve certainly never seen quite so many “intern” listings in a set of movie credits. However, there is nothing particularly Arizonan about proceedings, and these could have taken place pretty much anywhere in the country. Scummy car salesman are, sadly, like cockroaches. By which I mean both in that they’re found everywhere, and will likely survive World War III – long after this has been forgotten.