Sometimes, film viewing throws a curve, and I was expecting this to be a different film by the same title. Synopsis of expected movie: “A teenage girl is kidnapped by a bizarre theatre cult intent on summoning an ancient witch.” Synopsis of actual movie: “A 9-year old boy is stuck in the middle of a classic Nerf battle that he has no desire to be in.” You’ll understand that a bit of a paradigm shift in my mindset was required. Yet you adapt and move on. If far from what I anticipated, I can’t complain, though this movie’s original title is a better explanation, and certainly less generic, if rather clunky: How You THINK You Look When You Play Nerf. 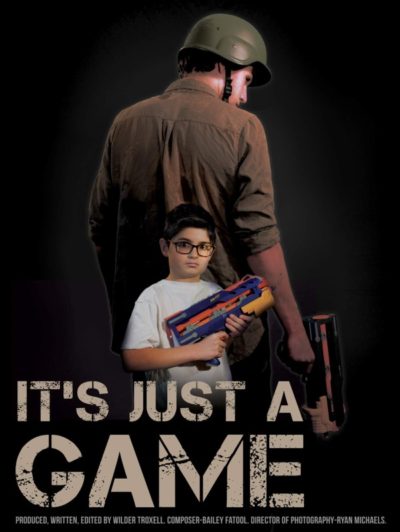 It takes place at the birthday party of Ryan, where he and his friends are engaged in a Nerf battle round the house. But in their imaginations, where most of the film takes place, they are in a far cooler forest with tree houses, where their toy guns are much more impressive. There, Ryan (S. Troxell) has to deal with the fact that the opposing leader, Taylor (Fatool), is a serial cheater; handle his youthful affection for team-mate Susie (Young); and work through alienation from his older brother (W. Troxell), who is now too old for this kind of childish game. Or is he? All of this has to be handled before it’s time for dinner, naturally.

Everyone involved with making this was in their teens at the time, and looking at the end credits, multiple tasks were the rule, rather than the exception. It’s a bit of a mixed blessing. The enthusiasm is palpable, and the idea at its core here is a lovely one, that should resonate with anyone who was ever a child (I trust that’s most readers…). However, it’s clear the makers’ talents are not consistent. Fatool, for example, can barely act his way out of a paper-bag, yet his score seems to have wandered onto set from a much bigger movie. Similarly, Wilder’s abilities behind the camera are considerably better than those in the scripting department. Even at barely an hour before the credits, there’s way too much slack, and a 20-minute short might have been more appropriate.

On the plus side, this is technically well constructed, with some impressive bits of camerawork, and editing that helps overcome the obvious lack of expertise in staging action. It does have some beautiful moments, such as Mom straying into the game to collect laundry, and becoming a mobile shield: she and the older brother are the only participants to be the same in both worlds. The end product goes to prove it’s possible to make a good-looking feature for the price of a car ($20,000 according to the IMDb), even if I suspect it will still struggle to recover its costs, going by the mere ten ratings and zero user or external reviews on the IMDb. Guess it has one now.