Is this a cartoon or CGI?  The opening sequence certainly begs the question such is its quality.  (It’s both, in case you’re interested.)

In a romantic and idyllic cluster of island nations, myriad sea beasts terrify all who venture upon the sea and have been doing so for generations, thus bringing into being ‘The Hunters’, who fight the endless war, along with book upon book of associated romantic mythology.  And here we join salty first-mate Jacob Holland (Kiwi Karl Urban playing a Kiwi) and tiny orphan Maisie Brumble (cor blimey mister if it ain’t Zaris-Angel Hunter innit, gawd bless ‘er, playin’ a cock’ah’nee) who finally combine forces when no longer serving the ‘mildly volatile’ Captain Crow (Jared Harris).

And the monster’s monster is Red, the taker of Captain Crow’s eye, and his own personal Moby Dick… call me Haimish… …err… 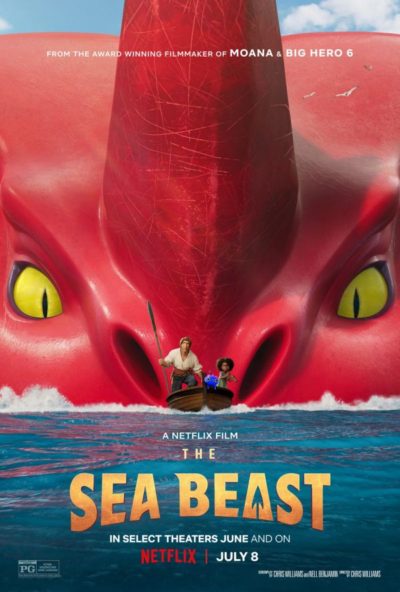 …anyway, as you perhaps might expect, in tone it’s all very (very!) Pirates of the Caribbean me’hearties, yo-ho yar lubbers, thar’s shoals of cliches ahoy off the larboard sparrow’s-castle, and never forget ‘The Code’ – which turns out to be an actual code and not just a set of guidelines.  Yeah, I was confused…  anyhoo… fetch the weather-gauge and splice the post-t, mop the mainsail and stand by you swabs for the mizzen’s in splinters and I don’t like the look of the main…

It’s an odd mix.  Much as you’d expect given the target audience (age-group).  It’s childish and two dimensional (oddly with almost nothing for the grown-ups), horrifically, horribly, almost disgracefully derivative (sometimes almost verbatim from Pirates…), all mixed in with a facile and childish morality tale.

What little by way of plot there is I shan’t spoil… not that I think that this is actually possible… as cast adrift Jacob and Maisie find a ‘surprising’ new ally and… absolutely nothing unexpected happens.

This is two hours of lightly and utterly unchallenging entertaining tosh for a much younger audience than you and I.  And it’s not actually too bad.  It’s not a patch on Shrek or Up! – it is a Netflix production after all – but yeah, it’s okay.

“You can be a hero and still wrong!”

[Jim: * = “an intense phobia or fear of large bodies of water”. Never say this site is not educational.]