Despite not being a practicing Christian, I have something of a weak spot for Christian horror films. Not even necessarily the classy ones [actually, I tend to think The Exorcist is over-rated], so much as the painfully earnest ones. But the problem is, staples of the horror genre are gratuitous sex and senseless violence. Tits and gore just aren’t very… Christian. There seems inevitably to be a resulting compromise, and it weakens the end product. Which is a bit odd, considering the amount of begat-ing, fire and brimstone present in the Bible, particularly the Old Testament. 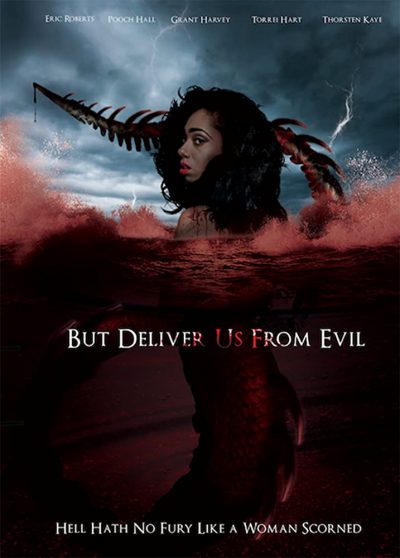 This movie illustrates the problems that arise from the resulting tension. It focuses on Lilith (Rose), who was the pre-Eve wife of Adam, thrown out of Eden for being a rebel. In this version (on whose scriptural authenticity I am not qualified to speak; there’s a fair amount of literal lecturing here), she was also there at the destruction of Sodom and Gomorrah. Now, she’s out to do the same thing to modern-day Atlanta. Before she can, she has to locate and destroy the last remaining descendant of Lot, the pillar of salt guy. Though for some reason, that road also takes her through a bunch of other men first. The eventual target is Jeremiah (Harvey), an orphan unaware of his destiny, who has conveniently just arrived, to enroll at a local college. He has been increasingly plagued by violent visions, and these turn out to be premonitions of Lilith’s activities.

I don’t think I’ve ever seen a film with more strippers, that contains absolutely no nudity at all. I mean, Lilith is basically Slut #1: according to the film, one reason she got booted was wanting to be on top when she and Adam had sex. But here, she might as well be Julie Andrews – and not even naughty, S.O.B. era Julie – despite her copious seductive talents. Rose certainly looks the part; she’s not so much packing junk in the trunk, as pulling a full U-Haul trailer. Not quite as sure about her performance, but since it is Lilith playing a role, a certain artificial air is not unwarranted. Rather less effective is Harvey as the hero. He seems permanently surprised, an aura not helped by hair which always looks like he has been dragged through a hedge backwards.

To the movie’s credit, it is rather more gory than most of its subgenre, and the results are occasionally effective. For example, the “CPR snake vomiting” scene did provoke a reaction. However, I venture to suggest they’d have been better off putting the money spent on Eric Robert’s pointless cameo, towards the effects budget. The main issue though is its inability to deliver the content required by the topic. If you’re going to make your movie about a demonic succubus, you can’t then go all coy and PG-rated when it comes to depicting the necessary sexual elements. Just because the devil has all the best tunes, doesn’t mean she necessarily has to have all the best movies, too.