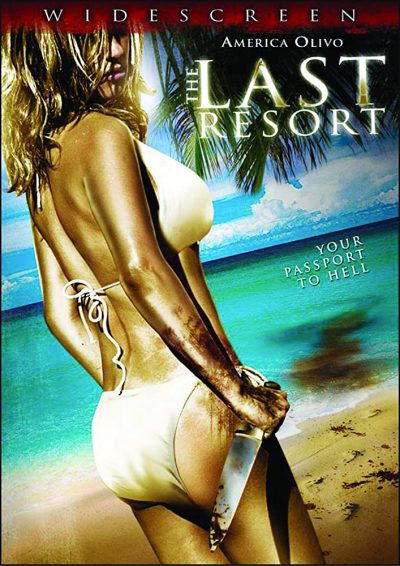 Giving your film a title like this is asking for trouble. It basically offers an open invitation for reviewers to write snarky lines like, “If you want to see a movie, this should be your Last Resort.” Just because it makes sense, doesn’t necessarily make it a good choice. [And there are at least two other films by that name, an 1986 comedy and 1996 action-adventure] There is a resort here, just outside a Mexican vacation town, though what makes it the last of its kind, is rather less clear. It was previously home to a cult preaching absolute freedom, which ended in the adherents going a bit mad, in a murder spree kinda way. To the town come five pretty young things on a bachelorette weekend. When a dodgy tour turns into a group mugging, four of them get dumped near the abandoned resort, and start going a bit mad too, after seeking shelter there. The fifth, Sophia (Olivo), missed the tour and now has to try and figure out what happened to her friends, with a significant lack of help from the local authorities.

The main problem here is one of pacing, and in a film where the credits roll in under 69 minutes, that’s an achievement. Maybe they should have called this, The Last Quarter-hour, because that’s where any entertainment value this has, is almost entirely concentrated. It comes after Sophia arrives at the resort and there’s finally a sense of potential threat, when she finds her friends there. For as she wanders the hallways, Sophia discovers they are no longer feeling themselves. They have apparently been possessed by the spirits of the previous residents, complete with the same murderous and self-indulgent taste for excess, and the results are fairly creepy. The problem is the hour it takes to get there, consisting largely of bickering, partying, or bickering at parties. Matters are not helped by most of the characters being nails dragged across a chalkboard, in human form.

The movie does not even have the courtesy to throw in a gratuitous lesbian make-out session, something I was informed is a required component of bachelorette parties. Indeed, the opening 60 minutes are almost entirely PG – which could stand for Pretty Grating as much as Parental Guidance. It is endearingly reactionary in some ways. Mexico is a cesspool, and its inhabitants largely depicted as preying on Yankee tourists, alternately scumbags and apathetic. The nearest thing to a sympathetic character you’ll see is a fortune teller. Meanwhile, there’s also an almost authoritarian bent to the depiction of the cult, whose descent into immorality is portrayed as an inevitable result of unfettered freedom. People can’t be trusted, appears to be the general message here. While an interesting angle, I’m not sure how deliberate it it. Even giving it the considerable benefit of that doubt, this refreshingly cynical brand of horror isn’t enough to rescue a film which is extremely mild salsa indeed.