Or, as it could perhaps have been titled, “Plastic Surgery Disasters”. For this starts when the mother-daughter pairing of Sylvia and Alison (Neuville), accompanied by the latter’s boyfriend, Michael (Hollanders), head off to Eastern Europe for some cut-price cutting. Mom wants a face-lift; Alison is looking for a breast reduction. However, it’s not long before the highly-dodgy nature of the medical establishment in question becomes increasingly clear. It turns out doctors there are working on some experimental anti-aging treatments, and security is particularly lax. Michael is allowed to wander around, stumbles across one of the test subjects, and ends up freeing her. Given half her face is missing (above) – though her teeth are still in good working order – this is a very bad thing. 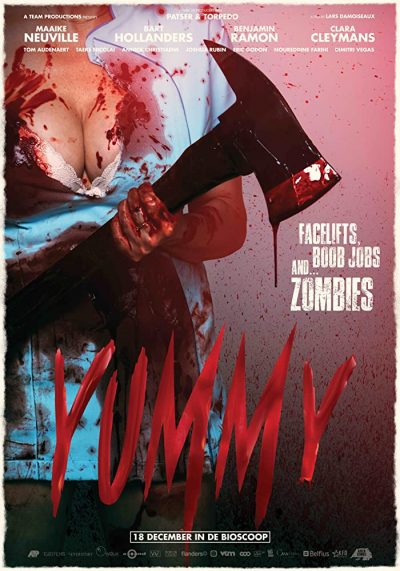 The rest of the film follows the zombie apocalypse template, which we’ve all seen, probably too often, before. Running around corridors; arguments among the decreasing number of human survivors; infections that lead to the bitees turning into biters. The characterization on view is little more than basic, e.g. Michael is a failed medical student, who dropped out of school because of his fear of blood. Oddly, neither of these defining aspects seems to serve much purpose. In particular, he seems to get over the latter with remarkable velocity. [Coming soon: my paper on the zombie apocalypse as aversion therapy] The setting seems to be trying to pass ironic commentary on the quest for beauty (the title plays on the double meaning of “looking yummy”), though again, it’s not executed with any particular skill. If you want that sort of thing, go watch Cronenberg’s Rabid.

The inhabitants are really little more than a canvas for some rather impressive special effect set pieces. Make no mistake, there’s plenty of gore on view, with intestines, blood and (in one sequence) liposucted fat flying frequently. The film is at its best when pushing the envelope there, such as the scene where one horny guy gets his dick set on fire – and things somehow still manage to go downhill for him from there. Though, as often, the bit that stuck most in my mind wasn’t the grandest of grand guignol. Rather, it was the scene where a small knife was used to free someone, by sawing off their fingers, which had become trapped in a grate. Sometimes, it is indeed the little things – in this case, the audio work – which make the difference.

The performances are unmemorable, and likely hampered by clunky switching between at least three different languages. It is mostly in English, and I suspect that isn’t the mother tongue of anyone in the cast. Neuville likely comes off best, with at least some effort put into giving her a character arc; the rest of the cast are simply a buffet on legs. It’s clear this is intended to be a throwback to the eighties style of horror. The problem is, this isn’t the eighties any more, and you need to put rather more effort if your zombie movie is not going to seem like it’s beating an undead horse.