Charles Bronson (no, not that one) achieved for a while a level of celebrity for being Britain’s most violent offender. Let’s just let that sink in. Celebrity.

This is an odd (a.k.a. difficult) film to review, as I’m not sure there is a story being told. Instead we are given an amplified window onto a man that I doubt many would understand. If you like A Clockwork Orange (1971) then it’s likely that you will like this too as both are hugely stylised, sometimes jarringly varied in pace and tone, and a little like Marmite – a love/hate thing.  So rather than try to be coherent, I’ll simply transcribe (and in part refine) my notes, in more or less the order that they were taken:

Tom Hardy… what to say… brilliant, the change of tone and mood flicking in an instant, and the scenes in his mind are hilariously mad. Hardy physically, emotionally and viscerally carries the film. His physical acting (poise) is superb. The others are good in support but largely trivial, providing sounding boards for the antagonist to bounce off – a central character with whom we hopefully feel no empathy.

The governor frowns, “So, sixty-eight days was it, all to yourself. Another of your prison records broken… We’re at a loss as to what to do with you!?” Hardy blinks,“Fuck off!” And you will need to come to terms very early-on with both a completely naked Hardy and the use of the word ‘cunt’, as there’s a lot of both. “…you will die inside…” which begs the question if he knew how to live outside his hotels, as he calls the prisons that secure him. I’m not sure this is actually a story, it feels more like a man trapped in a constant state, and maybe that’s the point. 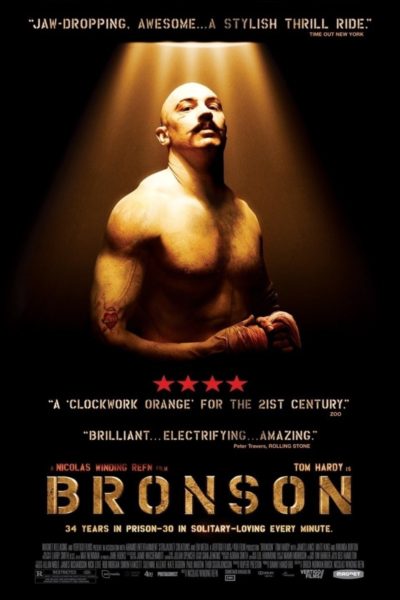 There is a minor change of pace when he gets released, and finds his way into bare-knuckle fighting along with other illegal ‘alternate’ physical challenges. Which is nice as at least we also get to see some daylight. Although this interlude provides frankly scant relief to the ‘overall experience’ and after stealing an engagement ring for his then girlfriend, it’s ‘back home’ for the naughty boy. Exhausting stuff.

Wait!? Is Art to be The Resolver? Ole!! And for just a moment we can believe that this man can be brought back to human-kind through the production of (bleak and deeply disturbing) art pieces. “Positivo! I know people and I think release is on the cards… We can do this!” says the art teacher, “What do you mean… we?” says Charles, voice low in menace, and in the sideways slide of a widening eye the tone, mood and demeanour flip. Fortunately for a bit of light relief a ‘Terry Gilliam’ styled cartoon scene arrives just in time, giving us another out-of-body experience as the art teacher learns just how well he really knows people. (It’s not well.)

If you ever wanted to see Tom Hardy naked, well you won’t after this. You will have had your fill. Probably. Hardy is superlative [dunno if that word really covers it], compelling and horrifically believable. The film is brilliant, brutal, beautifully shot, well paced, grimly humorous with a great use of very varied music to point and counterpoint the action – even Delibes gets a run out.

Bronson seemed to be someone who could never have been released, and nor was he. Of his thirty-four years in prison (as at 2008) Bronson had spent thirty of them in solitary, whilst serving what had become a life sentence. No attempt is made to try and explain why this man was as he was, and to be honest that isn’t really the point of the film.

This is one of the few films that I’ve gone back to watch again almost immediately as it is brutally unsettlingly brilliant. However it is also unresolved and so ‘only’ a B+, mostly because I’m still not sure it is telling us a story and instead it left me with only a vicarious insight into someone that all of us would hope to never meet, and an oddly hollow feeling.  The film is also perhaps oddly unmemorable albeit impactful as there are no stand-out moments, it’s basically just the same scene/story told again and again.

In summary, if you’re not hooked in the first ten minutes just give up, it’s not worth your time.