Every time I watch one of these Wakaliwood productions, I start off shaking my head at how utterly terrible they are. But every time, I end up laughing hysterically with the film. There’s just something about the approach which is relentless, and as irresistible as a tidal wave. You can’t stand up against it, you just have let it sweep you away, and take you where it will. In this case, it’s loosely the life story of Black (Gloria), an orphan who runs away from home, and ends up leader of the biggest local gang. She vows revenge on the ultra-rich – well, by Kampala standards – Hirigi (Dauda), who had tormented her when she was young. There’s also Western doctor Alan Ssali (Hofmanis), who goes on his own rampage of revenge after Black steals his father’s commando dog tags – pausing only to be trained in kung-fu by young street kid, Wesley Snipes (Rolean). 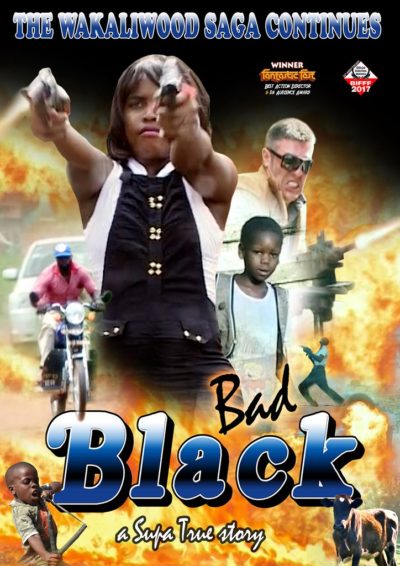 As ever, none of this makes sense and there’s no way it could possibly work as a film. Except, of course, it does, albeit only in the universe it inhabits; one where the film will, itself, fast-forward through what it regards as boring exposition. This is also one where VJ Emmie provides his usual sardonic stream of over-dubbing, pointing out actors from other Wakaliwood movies, or proudly announcing when the film becomes Uganda’s first women-in-prison movie. The commentary reaches its peak when Dr. Ssali is spraying around a machine-gun: “This doctor needs borders!” roars Emmie. All this and a Zoe Bell reference too. It’s safe to say the VJ elevates proceedings to a whole new level of surrealness.

Though it does take a little while to get there. Early on, this feels almost like a gritty slice of life in the grim slums of Kampala, eye-popping in its poverty. This is despite an opening in which Black’s father, Swaaz (named after Schwarzenegger, naturally), robs a currency exchange to pay for her mother’s medical care. The crime leads to a car-chase, complete with delightfully naive miniature effects. Generally though, it’s almost distressingly serious in the way it opens, and it’s only gradually that the trademark Nabwana excess comes to dominate proceedings.

Interestingly, according to Wikipedia, “Bad Black” is the nickname of Shanita Namuyimbwa, “a Ugandan socialite, commercial sex worker, and extravagant spender,” who was active around 2010, and ended up going to prison like the heroine here – for embezzlement in her case. I’m pretty sure she would be known to Nabwana, which perhaps helps explains the description of this on the poster as “a supa true story” film. Whatever next? Will we discover Captain Alex is a real person too? To be honest, it doesn’t matter much, though I would be curious to find out what Ms. Namuyimbwa thinks of her depiction. Also per Wikipedia, the budget on this was $85. Nope, there are no zeroes missing off the end of that figure. I really cannot think of a better way that money could have been spent.