To start at the end, much like the film, I’m not really sure if I enjoyed it or not, and am hoping that writing it up will help me decide.  However, and it’s worth saying up front, supernatural horror films are very much not my ‘thing’.  Now, let’s dig in.

The opening credits set the tone of the whole piece, being darkly moody and decidedly low-key, during which we are told that it is ‘Based on a true story’ – which is partly true as it’s based on the Crying Woman legend (La Llorona) and other legends about highway ghosts. This is a Spanish language film with subtitles, set in a verdant part of Mexico that actually looks quite European, and some of the several sub-plots stem from the differences between being Spanish, Spanish in Mexico, and being Mexican.  At least minutely.

A tried and tested horror trope gets us started as we join a single woman driving alone, late at night on an unlit road.  The woman is continually distracted from the road ahead by fiddling with the radio and wiping away tears, and, whodafunkit, we don’t have to wait long for the inevitable collision.  Agata, our careless driver, forms one part of our four protagonists – Catalina and Agata, identical twins (both played by Fox) who share a ‘special bond’ common to horror movies, and Nuno (Collado) and Omar (Méndez) as their respective boyfriends.

It is through Agata’s accident and its aftermath that the others get drawn into the riddle of Kilometre 31, a notorious accident black-spot that the police are none to keen to have people investigating.

Early on, the cinematography is high contrast, often close-shot, highly kinetic and hectic, before resolving, almost dissolving into slow paced ‘waiting’, shot in muted pastel colours.  There’s little use of mood music, just an almost sub-sonic roaring to unsettle now and again.  Added into the weave is a deftly used mix of ghostly voices whispering, doors opening themselves, children heard sobbing, people calling out indistinctly, far-away crying, bloody trails left on pavements, half glimpsed darting shapes and some very very wide eyes.  None of it is overly overdone. 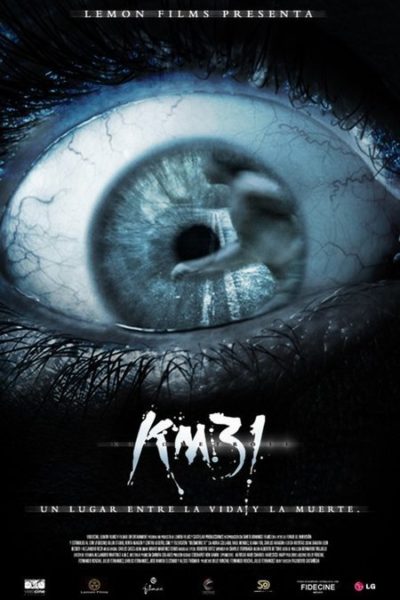 The second road accident made me laugh as it was exactly the same set up as the first, albeit this time with our three investigators squabbling in the car, again at night, and all paying scant attention to anything other than looking meaningfully into each other’s eyes.  And before you have the time to say whodaf…

…ker-blam! …they have bulls-eyed a rather silly woman who was standing in the middle of the unlit road at night, at an accident black-spot, in a swirling mist.  So, let’s be honest, she had it coming, if you’ll pardon the entendre.  And it’s at this, the half-way point, that the creepies really start crawling, for the standing woman had already been dead some twelve hours.

“Do you believe in ghosts?”

So buckle-up and strap in, it’s ‘all downhill’ now, and events gather pace as all the relationships seem now to be oddly out of kilter, and everything starts feeling more than a little unsettled, intense and tightly emotional.

“Something strange is going on.”

Wisely the three investigators split up, because we all know how well that works in horror films, and along the way Catalina and Nuno meet up with ‘The Oracle’ (albeit sans Neo) who sets them straight on a few things.  In the mean time Omar finds his own truth-sayer, and between the parallel lines we learn the back story to what is occurring and why, and, picture this, with a heart of glass, we wonder will anything happen, pretty baby?  I know… but I don’t know, but one way or another, we’re going to find out.

As the various threads draw back together, events spiral uncontrollably as a night of the pitchest black falls, just in time for the obligatory thunderstorm to roll ominously in.  The thunder and lightning offers no escape from reality and, mamma mia, heralds the denouement played out in an abandoned metro tunnel, that somewhat implausibly joins at the start to some storm drains/sewers.  In any event, this marks the end of the line for all involved, and if continuity or coherence bothers you, then you’re watching entirely the wrong genre, bruv.

And finally, finally, the one you didn’t expect is the one who makes it home.

So, much like the film – to end at the beginning – writing this has helped me conclude that it’s a B, and a pretty solid one at that.  It’s not a genre I prefer, but it is well done, the players play this low-key horror very nicely, are suitably goggle-eyed when required, and there’s quite a lot else to like in this film.  It’s well shot and neatly edited, with a few good shocks and creepy moments along the way, and thankfully not too much overt screamy-shouty-silliness.  Now, I can hear a few people muttering at the back ‘…but what’s the actual plot…’ and well, I’m not telling you because it is worth a watch – just less so if you know what’s coming.

In summary, if low-key and moody supernatural horrors are your thing then it’s very well worth a watch, and probably worthy of an ‘A’.  Alternately if you’re on a long-haul flight or just stuck at home, then I’d still suggest watching it, for whilst it’s not brilliant, it is pretty good.