Reading my review of the original Kingsman movie, the line that stands out is that it “certainly didn’t feel more than two hours long.” That stands in contrast to this prequel, set largely during the Great War. While almost identical in length, its 131 minutes definitely felt a bit of a chore on occasion. What seems missing in particular is the same, consistent sense of lunatic fun, which only appears here in intermittent bursts. The highlight is perhaps near the end, when the Duke of Oxford (Fiennes) attempts a jump using a primitive parachute. Only he fails to stick the landing, ending up dangling off an ice cliff, and has to dodge death and mountain goats to make his way up. 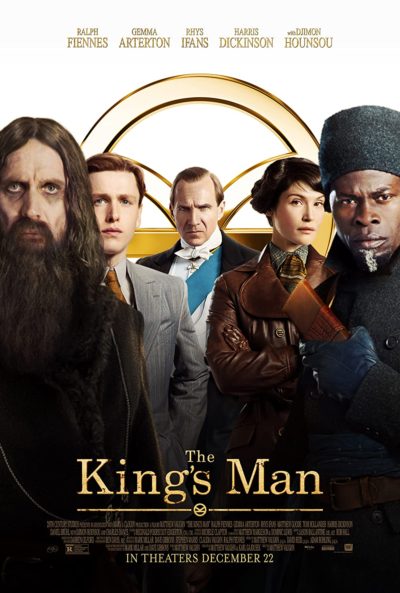 It’s the kind of unencumbered entertainment, which the movie could use more of. The early going, in particular, is a slog, combining real historical characters with fake history, and shoehorning in po-faced, if fortunately brief moments lecturing the audience about colonialism, class structure and pacifism. I dunno about you: it’s not why I’m here. The professed egalitarianism seems ill at ease with Oxford’s staff standing in lines outside his mansion to welcome him back from a jaunt in a biplane. The overall plot concerns his battle against an evil mastermind called The Shepherd, who wants to bring down England, because he’s Scottish, see? [Though he’s played in kiltface by an English actor, with a variable and dubious neo-Scottish accent] This plan involves triggering world war, with the help of Lenin, Gavrilo Princip, Mata Hari and Rasputin, among others. Meanwhile, Oxford has his own, racially and gender-diverse allies in servants Pollyanna (Arterton) and Shola (Hounsou).

Which could have been okay, and I did like the idea of a “below stairs” network, able to operate under the radar. Except, instead we get a lengthy thread about Oxford’s son, Conrad (Dickinson), his quest for independence from a father who is over-protective (albeit for understandable reasons), and eventual death in the trenches. Ok, it provides motivation for the Duke. Yet, like The Shepherd’s plan for Scottish independence, you’re left thinking there must be better ways to accomplish the same end. Perhaps without Conrad hijacking authorship of Wilfred Owen’s poem, Dulce et Decorum Est. For some reason, of all the historical inaccuracies embedded in this, that was the one which annoyed me the most.

On the other hand, the portrayal of Rasputin (an unrecognizable Rhys Ifans) as a sword-fighting, wound licking pansexual, is the kind of unfettered cinematic shitposting I expected to see. Vaughn has made his reputation by not giving a damn, and if I wanted a two-hour apology for the British Empire… Once again, I really don’t. Even when offered, I’m probably not going to accept guidance, from a film which has Mata Hari seducing Woodrow Wilson in the White House, to stop America from entering World War I. The film needs to pick a lane and stick with it, as the shifts in tone here are jarring and enough to give you whiplash. I’d say, the further this stays from adopting questionable moral postures and asking to be taken seriously, the better for all concerned.