I think I pretty much knew what I was letting myself in for, when we reached the extended super-soaker fight between three under-dressed young women. A local yokel then finds a leech attached to his crotch. Roll titles! Yes, this is, of course, a remake of the 1959 movie, Attack of the Giant Leeches, which entered the public domain after its copyright was not renewed. As you can tell from the original review, it was not without its fun elements, and a remake is not necessarily a bad idea: there’s certainly room for improvement. I’m considerably less convinced that Kelly has managed to make anything better, for this more or less peaks with the super-soakers. 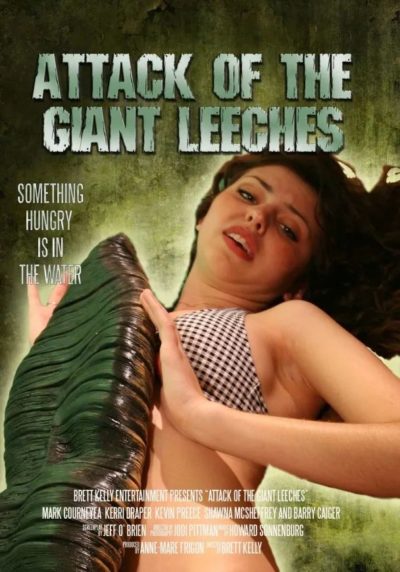 The central idea is similar. The residents of a town come under attack by the titular creatures, with local ranger Mike (Courneyea) investigating, despite the disdain of the town sheriff (Preece). Helpfully, the father of his girlfriend, Gracie (Draper), happens to be a scientist and can provide advice – in a British accent, which always helps. Meanwhile, the town slut, Mary (McSheffrey) is having an assignment with her lover on the shore of the lake. No prizes for guessing how that ends. Especially if you’ve seen the pic at the top. Bizarrely, the leeches here appear capable of leaping out of the water to attack at throat level. Well, when I say “attack”, I mean “be held by the actors against themselves, in order to give the impression of attacking.” It almost makes me miss the trash bag clad divers from the original.

Actually, scratch the “almost”. This is woefully dull in the most part, spending far too much time on the love triangle between Mike, Gracie and her ex, Sheriff Bucky. The supposed hero comes over too often as a whiny, petulant man-child, and there is only so much redneck shit masquerading as failed attempts at humour I can stand. There isn’t any sense of progress, with lackadaisical leech attacks eventually leading to the scientist suggesting they take off and nuke the swamp from orbit. Or, at least blow stuff up. Though even there, we don’t get much more than people pretending to react to an off-screen explosion, and rocking their boat back and forth slightly. Suggestion: if you can’t afford an explosion, don’t write one into your script.

While I appreciate the idea of remaking low-budget public-domain movies, there isn’t much point if you do so on an ever lower budget. This fails even to meet the low standards set by the original – for a movie shot in 2008, it looks terrible, and the audio is all over the place. Nor does it bring anything new to the party. I mean, at least have the super-soaker girls take their tops off or something – though I was surprised by how long into the film they survived. That is about the only unexpected trait the film has to offer, however, and you would be better off in every regard with the version made close to have a century previously.