A bizarre mix of socially-earnest drama and exploitation, this manages to make very little sense. Tracy (Guerra) is the teenage daughter of single mom Kim Stallworth (Bertram), who also happens to be a Los Angeles detective. When Tracy runs away from home, Kim is all distraught and seeks help from another officer, Joe Garcia (Sanchez). Turns out Tracy has fallen into the clutches of a sex trafficking ring, whose minions prowl the streets in a white van, looking for fresh meat. Turns out they have people in the LAPD, who have squashed previous efforts at investigation – in particular, her boss is so blatantly involved he might as well be wearing an “Ask me about my whores” T-shirt.

But the main problem here is the movie’s tendency to swerve off, all over the place, almost at random. For example, the film opens with, and then has several further scenes of, a homeless guy ranting about this being the last stop. It’s kinda poetic, in a loose way, but can hardly be said to contribute to the narrative. There are a slew of other, similar sequences, which bear little or no relevance to the plight of Tracy, such as the one where minion Fressa (Pinner) has her daughter taken away by social services. I guess villains have family problems too? It doesn’t help matters that Kim is about as useful as a wet paper-bag. Which some degree of concern about her daughter is understandable, it’s Joe who is doing most of the work in terms of tracking Tracy down. 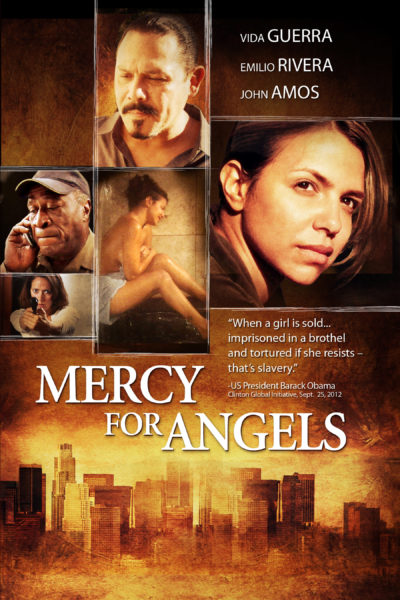 Much of this would not be at all out of place in a Lifetime movie, but at a number of points it then shifts gears, adopting an almost grindhouse vibe. The number of close-ups of Tracy’s ass we get, even in just her first scene, is almost disturbing. Then there’s the sequence where she is sodomized with a strap-on dildo by Fressa, wearing a shiny red PVC catsuit. This and other elements appear to have strayed in from a seventies women-in-prison movie. I must not forget to mention the very odd scene where a captive is forced to eat strawberries and play Simon, while a lingerie-clad Tracy watches, before being blown away (without any sound!) by a shotgun.. I can only presume this is a curiously specific fetish of some kind.

After a failed, mercifully brief, attempt to go undercover as a homeless person, Kim gets a random tip from another girl about a party to which Tracy is being brought. This is supposedly a high-rent affair, though appears to be taking place in a semi-detached suburban home, going by the furnishings. A random ticking clock element is added, with Fressa demanting Tracy be returned from the party so she can be taken down to the dungeon. I’m not sure what for, but Fressa is lying on a couch with a light-bulb on her stomach, so it’s unlikely to be a good thing for Traci, I guess? However, it turns out she wants to help Tracy escape, because the girl reminds her of her younger self. Uh, where was that empathy when she was enthusiastically wielding the rubber cock on Tracy?

That’s about the only unexpected twist in the entire thing. The police arrive, raid the main house and after the most lacklustre attempt at artificial respiration in cinema history, Tracy is eventually reunited with her mother. Though the film chooses to spend more time on the reunion of Fressa – now driving a very nice car – with her daughter. “Angels conquer all. Remember that,” she says, before her daughter is green-screened into the air, and the world melts into a coloured filter for no apparent reason. I guess everyone lives happily ever after, even the villains.