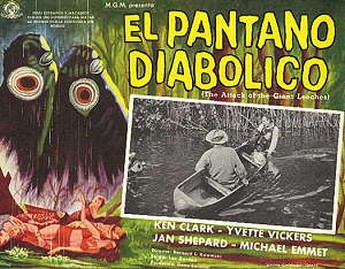 This film proudly wears its leeches on its sleeve, as it were – not only are they featured in the (utterly fabulous) trailer below, along with a promise that “Fear will pierce your flesh until every nerve in your body explodes”, they turn up in the opening scene of the film. No hiding of leeches under a bushel here, which is probably a shame, as if any effects ever deserved to be hidden under a bushel, it’s these ones. Rarely have “men in a crap costume” been so pathetically laughable, yet the film has a sweet charm, precisely because it wants you to believe in it.

There’s a lot of leechy fun to be had here, apart from giggling at the monsters themselves: the way they seem to favour the taste of the morally suspect characters (notably Yvette Vickers’ shanty tramp – she was a Playboy playmate in July that year) or perhaps how their attacks look more like the amorous advances of a drunken uncle. Also enjoy the otherwise superfluous scene blaming it all on radioactive seepage from atomic rockets at Cape Canaveral. Inevitably, it was a target for Mystery Science Theater 3000, yet it’s enjoyable enough on its own.