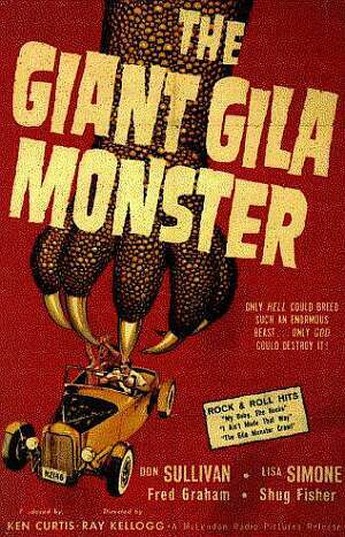 Let’s just repeat that last actor’s first name: Shug. A Lovecraftian demon masquerading as an actor? Could be, for this is often derided as one of the worst of all times: it’s not (quite) that bad, being for the most part technically competent, and the titular monster is actually pretty lifelike. This is probably because it was alive; they used a genuine lizard and let it rampage around, trashing a bunch of models – writing that, I imagined Naomi Campbell getting squished, a vision sadly unfulfilled, for it would have been a great deal more interesting than most of the movie.

Large sections are hugely dull, and horribly dated, from an era when “platter parties” were hosted by cutting-edge DJ’s in jackets and ties. The car-mechanic hero bursts into song with disturbing frequency and his French girlfriend is largely incomprehensible. Beyond them, you have the local sheriff whose spectacular incompetence at criminal investigation can only be admired, and the concerned parent who thinks the hero was involved in his son’s death, not knowing he has actually become a gila appetiser. Those the were the main plot-points I noticed between reading the newspaper, but we do get Things the Movies Teach Us, #285: nitroglycerine only explodes when brought into contact with oversized reptiles. You’ll probably want to have something more interesting to hand for the boring parts – such as washing-up, ironing or picking your toenails.