Yeah, it’s more or less inevitable that this is not going to live up to its title. How could it, realistically? Still, there remains a sense of disappointment that what we get is likely closer in tone to the director’s previous film, A Very Corgi Christmas. Admittedly, he was also responsible for Dark Rising, starring the same lead (they’re married), and which goes along similar, tenticular lines. I guess if you want to work, you need to make what the market demands. Cymek certainly isn’t alone there, with genre stalwarts like David DeCoteau and Anthony C. Ferrante lending their names to TV movies such as Mommy’s Deadly Con Artist and Crown Prince of Christmas respectively, in between more “personal” projects.

This begins with a prologue in the fifties, where miners blow open the underground lair of an octopus-like creature, the sole survivor eventually sealing it off once more with dynamite. Fast-forward to the present day, where a new Russian laser drilling tool is being demonstrated at the mine, in front of an eager press corps. They include hot-shot reporter Hunter Hazelton (Kingsley), fresh off her latest undercover scoop as a stripper, and her deadly rival, Annie Markowitz (Mitich), You will be unsurprised to learn the laser once again unleashes Rocktapussy, as well as a slew of other dangers, including zombies, lava, a Rocktapussy-worshipping cult and, particularly unexplained, a medieval knight in full armour. “And why not?”, if I may be forgiven going full Barry Norman for a moment. 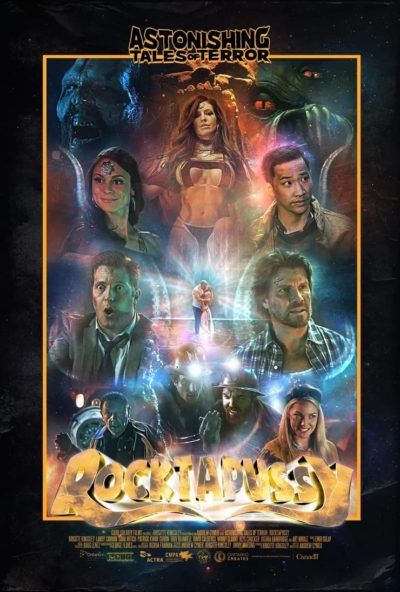 It feels as if the makers simply threw as many ideas as they could in, and hoped for the best. The main two problems though, are a film that takes too long to get going, and the decision early on to split the party up. There’s Hunter and hunky miner Carey (Cannon), who exchange rom-com banter apparently left on the cutting-room floor from Romancing the Stone, as they meander through the passageways. Then there’s Annie and everyone else; the switching back and forth between the two groups seems to stop the film from building much momentum. Eventually, they are re-united, and things do improve – not least because the costumes seem to have strayed in from Hunter’s time as an undercover stripper.

I sense the makers were aiming for something along the lines of Lair of the White Worm, a tongue-in-cheek romp which is not intended to be taken seriously, by anyone outside of the characters. However, this takes too long to develop the same, delirious sense of outrageousness – arguably, never quite getting there. Things look decent enough, even if glimpses of Rocktapussy are largely limited to the monster’s tentacles waving menacingly around. It just is in desperate need of embracing the silliness of its core concept, and all the trimmings with which that is endowed. You can’t do this kind of thing, while also trying to keep one foot in family-friendly territory. Cut two minutes, and this could potentially turn into A Very Rocktapussy Christmas.