This is not to be confused in any way, with 2002’s Ankle Biters, a truly dreadful effort which somehow managed to piss away all the potential inherent in the concept of midget vampires. This is only a slightly dreadful effort which somehow manages to piss away a good chunk of the potential inherent in the idea of a four-pack of prepubescent psychopaths. I think it fails mostly on the weakness of the characters and their relationships, which first-time director De Brandandere never manages to make convincing. It doesn’t help that his central figure is not very likeable at all. 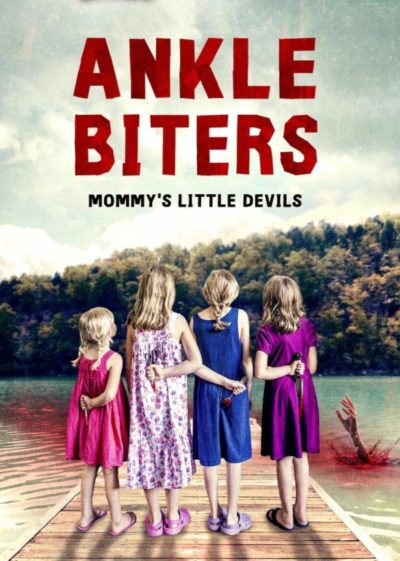 The first thing we find out about Sean Chase (Lee, who also co-wrote the story with the director), is that he’s a former hockey player, who beat an opponent so badly, his victim’s eye was left lying on the ice. He is subsequently forced out of the game with a neck injury: yet in another very early scene we see his funeral? It’s all rather confusing, especially since in his hockey days, he’s spouting a bushy beard, which immediately vanishes. To be honest, for some time I thought these were different characters. While I eventually realized they weren’t, it was a misstep from which the film perhaps never fully recovered. Anyway, he is now dating Laura (Evans), the mother of four young girls (played by the real-life Reid sisters), and intends to propose to her during a weekend family getaway at a cabin by a lake.

The kids are rather dubious about this prospect, to put it mildly. When they discover a sex-tape, apparently showing Sean hurting their Mommy, who has a bit of an S/M kink, they misinterpret it, and decide that her boyfriend must be got disposed of. Though to get there, they first dispose – more or less “accidentally” – of their babysitter, Matia (Jackett), tying her up with sex tape and pushing her into the lake. When the corpse is found, it’s Sean who is the focus of the investigation, given both his record of violence, and long-standing relationship with Matia. That’s another weird element, which never quite gels, feeling forced and unnatural.

Indeed, the whole thing fails to satisfy. I get how four little girls could possibly overpower a babysitter. But a hockey enforcer? Even one recovering from an injury? And while the individual performances from the sisters are fine, I never bought into the notion of them being capable of murder. The film probably should have focused on the eldest, making her the ring-leader, with the others more or less following along, as little siblings do. On similar lines, opening the film with a song by convicted paedo Gary Glitter… um, yeah… weird, and not a decision I’d have made. None of these little flaws would be fatal by themself. However, they all compound to derail the end product. Positives like a small child being punted off a balcony just can’t compete, I’m afraid.