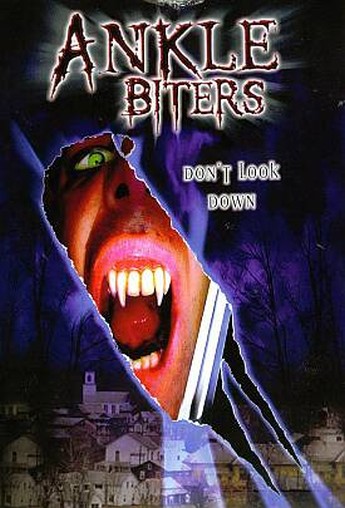 Great concept – I mean, what’s not to love about midget vampires? Needless to say, this one leapt off the shelf into our hands. Director-star Miranovich plays Drexel, a Blade-esque vampire-slayer with fangy tendencies of his own, forced to battle a posse of mini-vamps, who are using a sword containing the spirit of the last full-size Dracalike to generate hordes of their tall brothers, since – for reasons that are largely unexplained – dwarves can only “turn” other dwarves. Even his own small sidekick, T-Bone (Moore – presumably not to be confused with a certain documentary film-maker, though certain Republicans would probably beg to differ there) falls prey to the curse. Then there’s the other hunters, equally as keen to see the end of Drexel as the small suckers.

Unfortunately, the execution is truly, irredeemably abysmal. Less from the script or even acting aspects, than abysmal direction, cinematography, editing, audio and FX. It looks to have been filmed with one camera, and the transitions between scenes are all exactly the same: fade out, pause, fade in. There’s way too much slow-mo, and the dialogue is often muffled or inaudible; the action blows chunks, and the vampire “attacks” – quotes used advisedly – result in a teeny bit of blood, but not as much as a nibble mark on the victims. By the end, even the midgets have been forgotten, in favour of a lame fight between Drexel and a bunch of Hell’s Angels, who drive around in circles for what seems like hours before attacking. Though “attack” again implies action, ferocity and energy that are sadly missing from the actual event. The makers deserve some credit for a fabulous idea; it’s just a huge shame the potential is all flushed away.