In important news I can reveal that Chris Pine is an inch or maybe two taller than Tom Hardy, and so, with ‘six degrees of separation’ and the ‘Kevin Bacon rule’ both applied, we should be able to rate all the rest of Hollywood in height order.  Yup… that’s it.  You can go now.

Oh… …the film?  Yeah it’s good!  Very good actually.  And funny, nicely paced, trivial and light, and a cute buddy-movie full of very funny silliness to boot.  It has a cute, kinetic and concise start that has our Bodie/Doyle Starsky/Hutch Obi-Wan/Darth told, in no uncertain terms… “…YOU’RE GROUNDED!!” by Mrs Boss who really isn’t happy!  And so, sat at their desks, they are whiling away the days doing basically nothing but having a bit of a laugh and chillaxing.

“God I love that kid!” opines Pine.  And you will laugh. 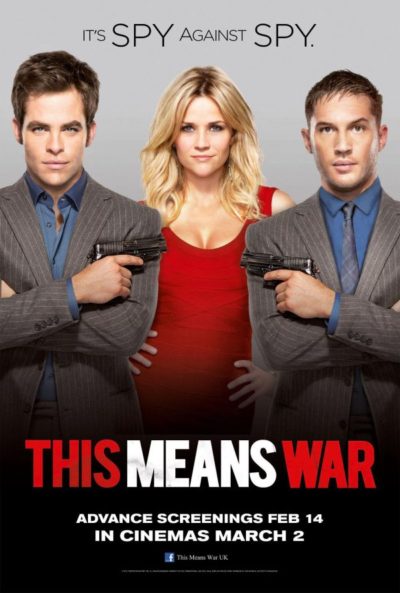 However ItsFate.net intercedes and things suddenly get ‘serious’ for Hardy (yeah I can’t be bothered with character-names as, frankly, it really isn’t that sort of a film bruv!).  For he has spotted a certain Ms Witherspoon (Reese) with whom he would like to… erm… build a solid and mature relationship, settle down and live a……. …hmmm…  Anyway Hardy takes along Pine, as his out-of-sight wingman for the first meeting, and in the end they both meet and rather fall for Reese.  Well, who wouldn’t!?  C’mon, she’s playing this generation’s Goldie Hawn in this flick, doing a damn good job of it, and is very likeable and cute!!!  (Do I use that word too often Jim?)

Take a deep breath as the fun can start now with the full resources of the entire CIA being brought to bear, separately initially, by the two knights now jousting for fair maiden’s favour… …sorry…  I’ve no idea where that line came from.
– “…we might have some constitutional issues…”
Similarly Reese is caught in a dilemma and seeks help from a friend, offering:
– “One has tiny hands and the other is… British…”
– “…oooh!” (It’s okay to nod, at least I did…)

In the mean time the obligatory bad man is back and unsurprisingly seemingly on-schedule to arrive with perfect timing for the final reel.  Whodafunkit?!

Look, I’m not going to write much more.  This confection is simply joyous silly fun and downright hilarious in part.  The three actors all take their parts beautifully, and I loved this film and would (and probably will) happily watch it again.

Criticisms?  Well, the colours are a little saturated so if you have a phobia or fear of werewolves blue eyes* then this is most definitely not the film for you, and the ending is, perhaps, a little bit weak.

Apart from that it’s very solid all the way through, and you should put it on your list immediately as it’s great!  You might at this point be wondering why it’s not an ‘A’, well here’s the thing, whilst it is cracking little film, it is also nothing that special.

PS Full disclosure, I am a fan of Hardy and Pine, and now Witherspoon, and I was well into a good bottle of red at the time, so…

* A mix of Cyanophobia (blue) and Ommetaphobia (eyes) since you asked…