Last year was the final entry in the Sharknado franchise – and with it, we waved a sad farewell to the SyFy Channel’s Shark Weeks. In both 2017 and 2018, we reviewed the veritable plethora of shark-themed movies provided by SyFy, from the terrible to the thoroughly entertaining. This year? While they had an ‘Off the Deep End’ weekend, this was almost all re-runs. The only new entry was this movie, starring and directed by linchpins of the Sharknado series.  But rather than flying sharks, it’s tsunami-powered undead that are the threat here. They are unleashed from the ocean floor to terrorize Hunter Shaw (Ziering), his family and friends, and the residents of Emrys Bay in Thailand. 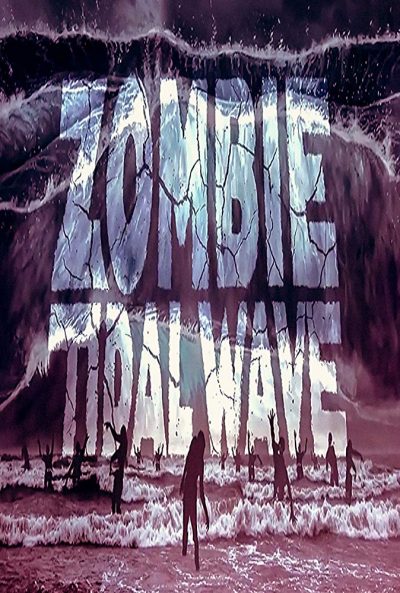 That’s about it, in terms of plot. I was quite surprised that the titular disaster is unleashed quite so quickly. Rather than being the movie’s climax, barely 20 minutes in, and we’re already witnessing the surfin’ dead. Thereafter, what we have is a straightforward zombie film, although as such, it’s probably darker than most would be expecting.  That’s especially so, if you were looking for something like the Sharknado movies, a high-camp exercise in celebrity cameos and goofy jokes. Here, the cameos are limited to nods to the auteurs of the genre, e.g. Romero beer and a rock-band called The Fulcis. Italian director Lucio Fulci, of course, famously had a shark vs. zombie fight in Zombie Flesh Eaters.

It’s also refreshingly practical in its effects, Ferrante largely opting to pass on the CGI-heavy work necessary for Sharknado, Given this is a TV movie, it’s impressively gory, though it probably helps that the zombies are hard to kill; not even a bullet in the head will necessarily stop them permanently. They also bleed something more akin to anti-freeze than blood, perhaps why Ferrante can get away with feeding zombies into a wood-chipper, or having Shaw carve them up with an outboard motor. [The latter being another nod to Italian zombiedom, echoing Marino Girolami’s Zombie Holocaust] But even on the human front, there’s a surprising amount of squirting as the gnawing intensifies, and you get a nice sense of devastation, especially around the eerily-deserted streets of Emrys Bay.

Considerably less successful are the characters, with Shaw such a carbon-copy of Fin from Sharknado, that Chris wondered where his one-armed wife had gone. None of the other cast make any more of an impression, from the black sidekick (Jolivette), through the teenager in peril (Chiniquy) to the local sheriff (Linzbichler). The plot offers no real surprises either, proceeding through a discovery of the cause, and a way by which they can be stopped, to the expected grand finale, complete with heroic sacrifice by a supporting character. While by no means bad on its own terms, this doesn’t offer anything new. Say what you like about Sharknado, it undeniably gave the viewer stuff they’d never seen before. This is just another zombie flick, and as such, I’m not seeing any credible way this could turn into a franchise.

Mind you, the SyFy Channel were so preoccupied with whether or not they could make six Sharknado movies, that they didn’t stop to think if they should… So who knows what 2020 might bring!