Girls just wanna have… fun? This droll cross between Re-Animator and Frankenhooker tells things from the point of view of the “monster”. It’s a creation cobbled together from the best bits of three victims: Jennifer (Stolper), Ellie (Fairaway) and Madeleine (Blasucci) – each character named after actresses who had played similar creations in The Bride, Bride of Frankenstein and Young Frankenstein respectively. They were “talent scouted” and abducted at the behest of a mysterious surgeon (Sorenson): now, they share one body, but the trio of disparate personalities are still present. It’s a concept the film illustrates cleverly, by cross-cutting in the same location, between the singular beast and the three component parts, as they bicker, bond, try to figure out what happened – and what they should do about it. 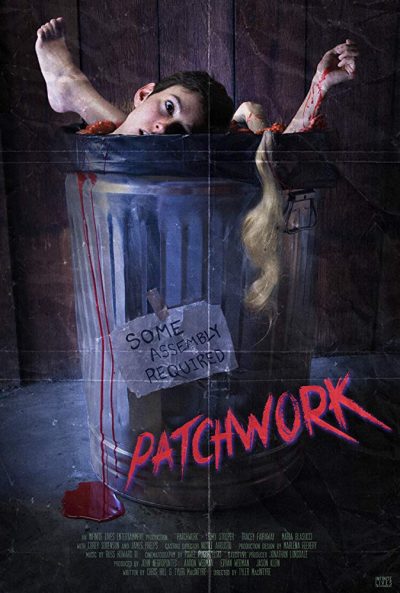 This takes a little bit to get into. It doesn’t help that the back-stories of the three victims are (in at least two-thirds of the cases, anyway) not very interesting. It’s only when they are forced together, and they begin to interact, that the fun starts, largely due to their incompatible personalities. Pretty much all they have in common, is that they hung out in the same bar (named, I note, “Vic’s”), and needless to say, this leads to significant differences in opinion, as to how they should handle the situation. At the moments where they all agree, it becomes quite glorious, such as the sequence (much of it, shot in one take) where she/they storm a frat house, taking revenge on the date-rapey inhabitants.

Towards the end, adding another twist to the saga, it turns out that one of the three women is not like the others, and may not be quite the innocent bystander she appeared, By the time it gets to that point, I found myself unexpectedly invested in the way things developed. And how can you not love a film with the line “Release the owl-cat!” Though it probably would have benefited from someone with more gravitas as the surgeon. When it comes to wielding the glow-in-the-dark reagent, Sorenson is more Bruce Abbott than Jeffrey Combs, and is hard to take seriously as someone on the forefront of medical science.

There’s also one of the Weasley twins from Harry Potter playing the creature’s romantic interest, a thread which probably should have been lost, several script rewrites before production. [He does get one of the film’s most memorable lines though: “You’ve got a really beautiful eye. Er, I mean, eyes. They’re both really nice.”] Against that, all three women are solid. Stolper, in particular, knocks it out of the park, since she is the one also playing the creature, under a large quantity of (mostly impressive) make-up. Together, the trio give the film an emotional core which came as a bit of a surprise, and each of the central characters manage to surpass the simplistic tropes which they initially appeared to be. Its heart may be this monster’s biggest part.