I should imagine that the conversation went a little like this:
‘Hey Jordan, I’ve got a movie idea, it’s called Zombeavers!’
‘Wow! Love the title Jon! What’s the story?’
‘…story…? …eum…..’

“You have seen that deer, right?”

To save you time, here’s the summary – it’s a cute and sharp smile-a-thon interspersed with some genuinely funny moments, and one where [a very well known game] will never be the same for you ever again – it’s a hilarious moment and you’ll know it when you see it.

It also has three willowy young women dressed permanently in hot-pants and not much else, who have decided to spend a ‘no boys, no phones’ weekend away in a cabin in the woods… dear god! …do these young people not know trope when they stumble headlong into it… anyhoo… Mary, Jen and Zoe arrive at their getaway, right by the lake, right by the beaver dam, where things unfold exactly as in every such horror film that’s ever been made. 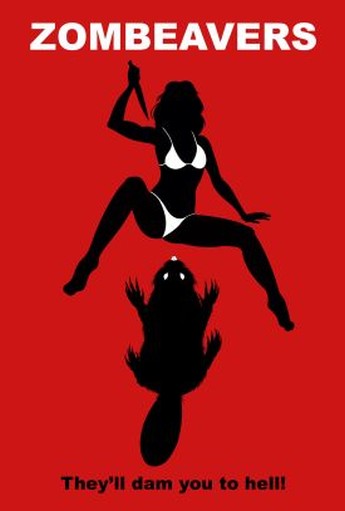 So, stepping back, to be clear about this film, it aims to be a mildly crude, puerile comedy, chock full with teenage nonsense that majors in skinny young women dressed in not very much for, well, most of the film. All interspersed with some topless moments and lots of sexual references, imagery and some mild sexual content. Oh, and it has the most hilariously ‘bad’ animatronics since, well Jaws, and they are stupidly funny and really add to the overall tone. Sensibly the robo-beavers are used quite sparingly, although introduced very early, leaving much else to be cleverly done with very little.

And it succeeds brilliantly. It’s cutely funny, savvy, sharp, with some very snappy dialogue, and overall it is brilliantly shit. Really 10/10.

The film is sensibly short at 85 minutes, the perfect duration for such fare, and overall it’s perfectly weighted and balanced for what it is, and wonderfully silly. To put the whole film into context, the closing music is ‘Frank’ singing the entire plot, set to maximum croon. It’s brilliant, and the included out-takes add another level of joyful silliness.

And. Well. There’s no point in writing any more. This is a ‘C’ movie that is, in my very humble opinion, brilliant and well worth 85 minutes of your time, and thoroughly deserving of a B+ (when viewed as a ‘C’ movie). (Caveat Emptor: it is puerile stuff and I had drunk a bottle of wine prior to watching.)

Jim: maybe that’s where I went wrong: not drinking prior to watching. Here’s my April 2015 review: Marvellous title, fabulous concept… And some of the most wretched excuses for characters I’ve ever seen in a film. Five minutes with the trio of vapid, whining college girls, and you’ll not just be siding with the undead rodents [are beavers rodents? Note to TC intern: please fact-check this before publication, then get back into the dungeon], you’ll feel that having your face chewed off by a psychopathic animal would count as a blessed relief. Then their boyfriends turn up and, remarkably, things get ten times worse. 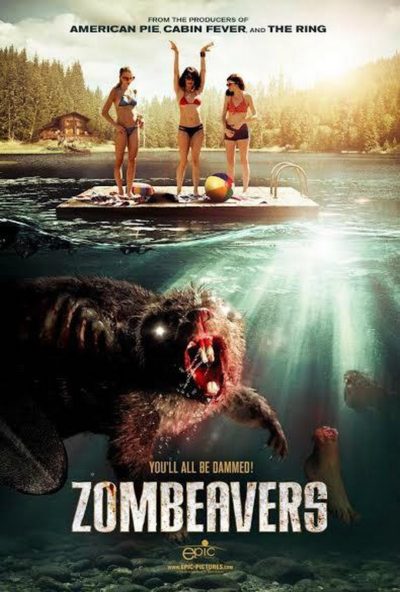 You will need enormous fortitude to sit through the first half of the movie, until the beavers show up in significant numbers, and things improve significantly, purely because the humans shut the fuck up, realizing they have far bigger, more aggressive problems than who slept with whom, or how long it has been since they last had an orgasm. Of course, part of the point may be deliberately making them unlikeable, in which case this is the greatest piece of cinema since Citizen Kane. But if so, five minutes would have sufficed.

This almost sinks the film before it gets going, yet it is somewhat salvaged by an enthusiastic second half which proves the beavers are not just unstoppable, a mere scratch will also transform any affect human into a similarly hungry, buck-toothed, flat-tailed monstrosity. [This incidentally leaves the inevitable post-credit, sequel-setting scene with a lot of questions, much though it plays into a personal fear] It’s also worth sitting through the credit for the snappy, Dean Martin-esque lounge tune which accompanies it].

While there is some crappy digital blood work, the special effects for the beavers are mostly practical: it’s not what I’d call convincing, yet that isn’t inappropriate in regard to the obvious B-movie vibe for which this is aiming. As long as this is in motion, with the human characters sticking purely to running around and being gnawed on, it’s decent fun. Whenever they stop and open their mouths, however, the stream of liquid shit which emerges will have you convinced you should have stuck with just the trailer. Grade: C-