At the time of writing, I have not read the Stephen King novel on which both this and the 1984 version were based. But I would have thought that a book needed to have something of merit to merit not one, but two cinematic adaptations. Having seen both, with their differing approaches to the text, I’m not sure what quality was present in the original source material to inspire these movies. Both turn out to be rather pedestrian and lacklustre, so is that an accurate reflection of King’s work? This one is slightly better, I feel, though the improvement may partly be a result of it being 20 minutes shorter. 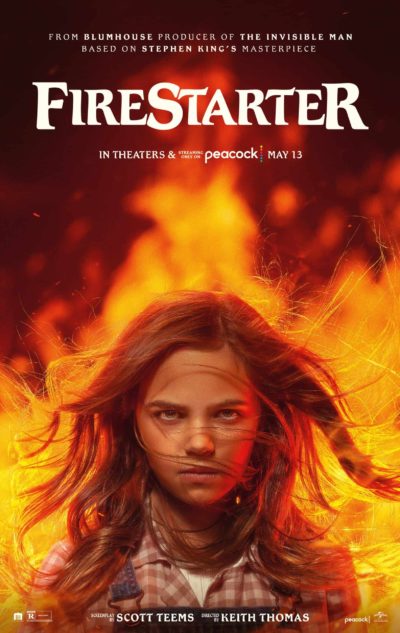 The basic plot is the same. Andy McGee (Efron) has a daughter, Charlie (Armstrong). As a result of a government experiment, both have psychic talents, and are on the run as a result. Maybe it seemed fresh and original in the early eighties. Now, it’s the kind of boilerplate conspiracy plotting we’ve seen often enough, with a side-order of X-Men like paranormal powers. That is not necessarily a fatal flaw, providing the way it’s executed is sufficiently imaginative, energetic or entertaining enough in some other way. Here, it manages to rise only to a level of competence, though the straightforward approach to the narrative does work better than the unnecessarily tangled mess in the 1984 version. The other major improvement is Charlie going all Hanna at the end, breaking into the facility where her father is being held. It gives her a much-needed greater degree of agency.

Another positive was psycho government assassin Rainbird (Greyeyes), at least played by a genuine native American here. From the moment we first meet him, listening to the most un-Indian of musical tracks – Nitzer Ebb’s Control I’m Here – he’s out of kilter to an enjoyable degree. If another familiar trope, it’s at least an entertaining one. The problems feel mostly in the direction, with a repeated tendency to fumble what should be significant emotional bullet-points. For example, there’s a scene where Charlie inadvertently sets fire to a cat. It should be a learning experience for her. Except, the way it’s handled, there’s no particular impact: you’re too busy thinking, “Damn, they just set fire to a cat.”

Except, naturally, they didn’t. It’s another problem – maybe the biggest, compared to the earlier film – that the CGI fire often fails to look semi-convincing. Elsewhere on the technical side, amusing to hear the retro score, by John Carpenter and his son, Carpenter having been fired as director of the 1984 version. That’s some long-game retribution. Generally though, it’s just another in the long line of almost entirely superfluous horror remakes. At least in this case, they did target one which had room for improvement. The problem is, it feels as if, in the process of fixing the mistakes made by the original, they introduced virtually as many flaws of their own. The result is almost as mediocre, just differently so.