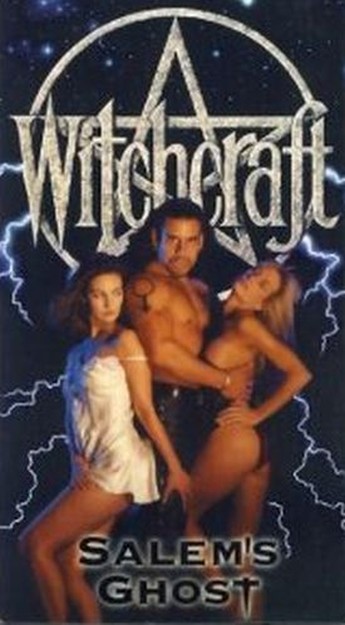 It’s only when you watch this one that you realize the acting in the others really isn’t that bad, at least by comparison. Because there are many occasions on which this doesn’t even reach the level of local amateur rep. It’s a complete reboot, with Will Spanner entirely absent: instead, it’s the story of Sonny (Grober, who could moonlight as a Chevy Chase lookalike) and Mary Ann (Kopf) Dunaway, who move from California to Salem, after Sonny was caught dallying with a student at the college where he taught, only for them to free the spirit of the warlock Renfro, burned at the stake 300 years previously, which has been walled up in their basement ever sinze. It’s released by over-zealous neighbour and local plumber, Mitch (Weills), who then becomes the warlock’s minion. Fortunately, there’s a representative of the “Protestant Church of England” – like there’s any other Church of England – on hand, in the shape of McArthur (Overmyer, in his only IMDB credited role, sporting an Irish accent which makes Dick Van Dyke sounds like Christian Bale). He provides the necessary exposition, being a descendant of those who walled Renfro up to begin with, and offers helpful tips on what Sonny needs to do.

There has been some suggestion this is an unrelated film from the same producers, plugged into the series, and the cheap copy-paste job on the opening logo, as well as the complete separation from everything which has gone before, lends credence to that theory. However, there are other elements in common, such as composer Miriam Cutler, who had done the music for the previous seven parts, and the storyline is certainly in the same area – though with at least one scene directly lifted from The Omen. Curiously, there are also echoes of the recent American Horror Story series, which also had a couple moving cross-country as a result of marital difficulties, only to find their new home containing supernatural occupants. However, if this contains 1% of the style or imagination, I must have blinked and missed it. Even the sex scenes are largely repellent, mostly because Grober and Weills should simply not be taking their clothers off: look, while I’m not exactly Adonis, neither am I appearing in video soft-porn or re-enacting scenes from 9 1/2 Weeks [the bit with the fridge, should you be wondering].

But it’s the acting where this really bites the big one, with hardly a single performance that’s even adequate. Kopf is okay, and Jack Van Landingham as Renfro at least looks the part, and chews the necessary scenery. Otherwise, dear god, these are rotten to the core, to the degree that I can’t pick any one actor out as the worst. Each time I thought I’d come to a definitive conclusion on that, the next scene would make me re-evaluate that by bringing new wretchedness to proceedings. The script isn’t much better: apparently, if you break through a wall in your cellar, and bright light streams out from the other side, that’s a cue to wander off and forget all about it until you have “settled in.” That’s the level of idiocy you can expect here, and if the preceding entries were hardly genre classics, they seem so when stood beside this one.