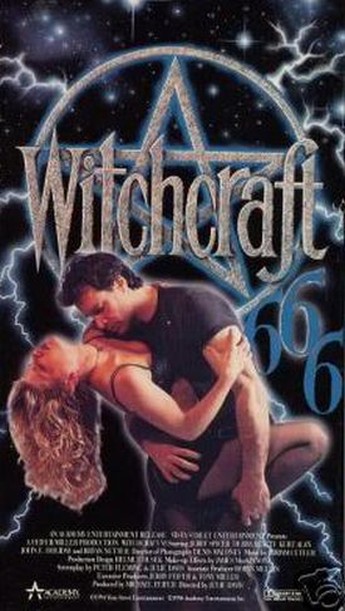 Dead bodies of young women are turning up all over LA, with no apparent cause of death, but each is carrying a gold cross. Detectives Lutz (Alan) and Garner (Holiday) suspect an occult motive, so bring in divorce lawyer Will Spanner (Spicer) to help, despite his girlfriend Keli’s qualms about exposing himself. As it were. Of course, there is an occult motive: Savanti (Nutter – no, that’s really the actor’s name, not an observation on his character) is a Satanic high-priest trying to find the “right” sacrificial victim whose death will open a portal for Satan during the upcoming eclipse. Unfortunately, she has to be a virgin. Do you know how hard it is to find one of those in Los Angeles? Especially when just about every actress present here seems intent on doing some two-backed aardvarking at the first available opportunity [you might be able to use that as a clue to spot the eventual victim]. Savanti sees the threat Spanner poses, and sends a vampy vixen to distract hin. Will that work, allowing Lucifer to be unleashed on the world? Or will it just be an excuse for more soft-core canoodling? Take a wild stab. Go on.

Director Davis would later go on to become a minor indie rom-com darling, but you wouldn’t really know it from here. The artistic highlight (once the producers abandoned their neat initial idea of calling this Witchcraft 666) is probably a montage of dubious “psychics”, whom the police test by giving them a piece of clothing, which they say comes from one of the victims. It doesn’t, but that doesn’t stop the psychics: naturally, Savanti sees the deception immediately, and that’s partly what brings him to Spanner’s attention. On the “artistic” side [if you know what I mean, and I think you do], top marks go to Debra Betty as Keli, who would appear to possess mermaid DNA, going by the amount of time she spends in the bath. Otherwise, what will stick in your mind longest is likely the amazingly-bad climax, featuring optical effects which appear to have been drawn on the print with a magic-marker, and which makes little or no sense, even in the loosely-constructed world which is the Witchcraft universe. Still, I can’t say I was ever bored by this, which mostly keeps moving forward at a decent pace, and covers over any slow points with copious nudity