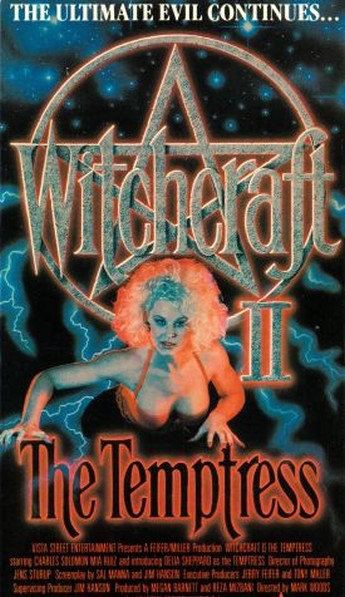 Though only a couple of years after its predecessor, apparently almost 18 years have passed, as William (Solomon), the baby who was close to the sole survivor of the original is now almost at adulthood, having been raised by a foster family. Blissfully unaware of his origins, or the potential he holds as a coven leader, his main concern is getting his girlfriend, Michelle (Ruiz) to put out: a preacher’s daughter, she’s not having it. So, neither is he, hohoho. But, literally next door lurks Dolores (Sheppard) a peroxide blonde vixen with a pentagram who appears to have strayed in from a Poison promo video, going by her choice of attire, which comes in two kinds: tight and skimpy. Mysterious packages start turning up for Charles, and as dead bodies start to pile up, his father (Richardson) reluctantly tells William the truth about his legacy.

I actually enjoyed this one quite a lot more, largely because of the batshit insanity present, just as Michelle being raped by an invisible spirit, or the way Dolores could not be a more obvious Satanist if there was a flashing neon sign saying “I ♥ Lucifer” pointing to her. The film doesn’t try to hard to conceal what’s almost entirely obvious to the viewer – especially the viewer who has seen the preceding film – but has occasional moments that do actually work. For instance, there’s the matching Satanic symbols with which William and Michelle are branded, and the way her father bemoans the fact that he’s a Methodist, rather than a Catholic, because the latter are much better at dealing with ‘this kind of thing’. We actually get some nudity too, from both the female leads, though we’re still a long way off the copious bosomage to come. While still thoroughly bottom-drawer, especially in terms of visual effects, I was surprisingly entertained, certainly more than the previous installment.