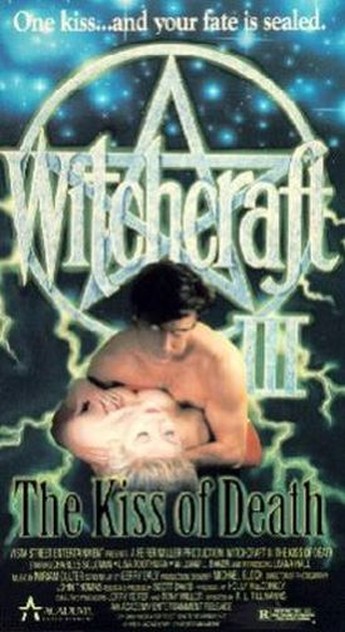 It’s only a year later, but the hero who was just about graduating high-school last time we met, is now apparently a fully-fledged lawyer, under his third different name, now known as William Spanner (Solomon); not sure what the Californian Bar Association’s position is on this. That set-up does allow me to tell you a joke: what’s the difference between a warlock and a lawyer? One is a heartless creature with no soul or moral scruples…and the other’s a warlock. Hey, didn’t say it was a good joke. Anyway, he has put sorcery behind him, and is enjoying life with his girlfriend, Charlotte (Toothman). Little does he know that Louis (Luciana) and Roxy (Hall) are approaching. They have a rather odd relationship: she seems to need life energy, and he procures the women from whom it can be drained. A chance encounter brings the good and evil duos together, and Louis sets his sights on Charlotte. Meanwhile, there’s a voodoo priest, who fills in the blanks, and convinces William he’s the only person who can stop the heartless creature with no soul or moral scruples. No… The other one.

This isn’t as entertainingly loopy as its predecessor, and works less well, largely because Solomon, convincing enough as a gawky and confused teenager, is hopelessly out of his depth as either Perry Mason or Dumbledore, which are basically the two roles he is asked to play here. I doubt Daniel Day Lewis could quite pull that dichotomy off. Unlike its predecessor, none of the characters here are remotely interesting, and you could largely fall asleep for the middle hour of the movie, and not miss anything. Now, you might regard that as literary hyperbole, but I might actually have tested that statement, by doing roughly that. On waking up, I rewound this to the point at which I fell asleep, to see if anything significant had happened. Nope. Needn’t have bothered. Indeed, if you’re doing a marathon of all the movies [Trash City accepts no responsibility for any resulting ill-effects from such a dubious enterprise], this entire movie would be a good time to schedule a nap or a bathroom break.