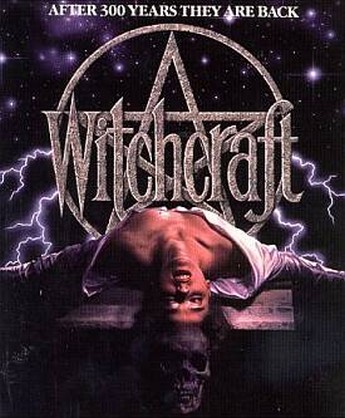 You simply wouldn’t guess from this starting point, that the series would spawn another dozen entries, because it’s almost entirely forgettable. Grace Churchill (Topol-Barzilai) has just had her baby, and husband John (Sloan) insists that they stay with his mother, Elizabeth (Shelley), while Grace regains her strength. However, courtesy of an apparently endless series of vision, nightmares and flashbacks, Grace becomes increasingly convinced there are shenanigans going on. She wants to go home, but John and his Mom won’t hear of it; the priest she invites to bless the baby ends up committing suicide, his face covered in boils, and the mute butler stops her from going into certain areas of the (extremely large, it has to be said) house. Given the movie opened with a pair of witches being burned three centuries previously, it doesn’t take a genius to work out where this is going. A viewing of Rosemary’s Baby will suffice, equally well.

I may as well reprise a chunk of my review from 2004, which still seems an accurate enough summary, not to need revision. “Despite a severe lack of surprises, there’s not much you can specifically list in the way of failings – it’s simply strikingly mediocre, in the strictest sense of the word. I think the script is probably the weakest link – the baby (very clearly, not a newborn!) seems like the key, but vanishes in the final third, as does the butler. However, the latter suddenly reappears to play a key role in the climax and does supply the film’s most notable death, an impressive impaling.” There’s almost a sense this was made for TV: the exploitative elements are toned-down to PG-level, and the film’s pacing appears to pause for breath, in the form of commercial breaks. But it’s mostly a series of horror staples, to the point of clichés. Though the performances didn’t seem too bad this time round, so I upgraded the rating a tick for that.