“The Producer would like to thank The Lord Summerisle and the people of his island off the west coast of Scotland for this privileged insight into their religious practices and for their generous co-operation in the making of this film.” That caption is how the theatrical version of the movie opens – basically setting the tone for the whole thing as a black comedy, because of course, neither Lord Summerisle, his people, nor the island exist. It may trail only Life of Brian as the most sarcastically anti-religious film ever, with Summerisle’s cult having been invented – or, at least, fostered, by his ancestor out of expediency to keep the islanders in line. Sergeant Howie’s strait-laced Presbyterian puritanism is little if any more appealing.

That said, you’ve got to admire someone willing to stick to his principals, especially in the face of Britt Ekland slapping her flesh seductively in the next bedroom down. My teenage self, watching the film (with the volume very low) in my room, would not have been so reluctant. Now, I’d still be round like a shot – albeit not for quite the same reason. I mean: compare Howie’s bed and Willow’s one. The bitch stole all the good pillows. If that’s not proof of innate evil, I don’t know what is. I’m amused it took four people to assemble Ekland’s performance. Her lines were dubbed by Annie Ross, the singing by Rachel Verney, and her butt doubled by (depending on who you believe) local girl Jane Jackson; Lorraine Peters, who appears elsewhere naked by a gravestone; or some stripper Hardy bussed in from Glasgow. 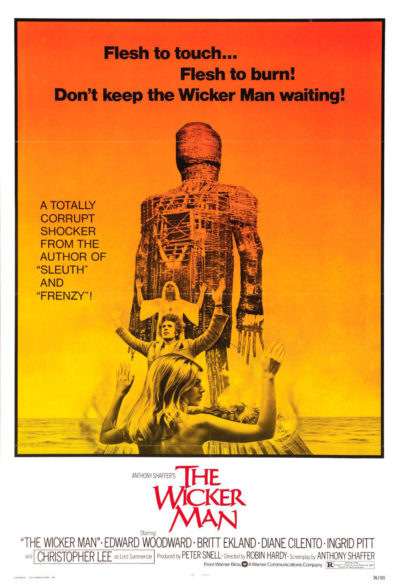 I have to mention the lack of actual Scots in the lead roles. Despite a convincing accent, Woodward is English, as are Lee and remarkably camp pub landlord Lindsay Kemp (who had already had an affair with David Bowie, and would go on to become Kate Bush’s first dance teacher). Ekland comes from Sweden, Cilento is Australian, and island librarian Ingrid Pitt is Polish. Still, who cares? Woodward pulls the best “I am appalled” faces in the history of cinema, the more he discovers the debauched (or sexually liberated, if you prefer) nature of life on Summerisle, and Lee’s snark is almost as memorable as his sideburns. Even knowing what’s coming at the end doesn’t matter. Indeed, it makes the inevitability of Sgt. Howie being reeled in all the more tragic.

You could draw a line between Howie and Gustav Weil from Twins of Evil, as portrayed by Peter Cushing [Lee actually pushed for his friend to play Howie; Hardy wanted someone younger] Both are driven by strong religious conviction to the point of zealotry, and are convinced of an evil presence in their town. They’re not wrong: it just isn’t quite what they expected, and consequently each man pays the price for it. I hadn’t realized that, despite being titled “Anthony Shaffer’s The Wicker Man”, it was inspired by a little-known 1967 book, Ritual by David Pinner. The rights were bought by the makers, only for Shaffer to claim he tossed out just about everything, save the core concept of a cop sent to investigate a rural cult. However, it appears scenes like Willow’s seduction do appear in the novel.

The version viewed here was the 88-minute cut, and I stand by my comments below about this being the superior one; it’s less self-indulgent, and has more consistent pacing, e.g. we don’t particularly care about Howie’s life on the mainland. There’s not a superfluous scene, and in this edition, it’s a sure-fire entry on the shortlist of greatest British horror films of all-time.

[August 2010] I’ll start by confessing a couple of heretical thoughts. Much as I love this film, I find the shorter version, edited by the film’s producers, to be a superior work to the director’s cut, which is desperately overblown and talky, with the extra scenes adding not enough to the film to justify their existence. Also, the soundtrack, particularly the song Corn Rigs, which is pretty much the kind of Aran jersey, bearded, finger-in-ear folk music nonsense I hate. Despite the director proclaiming to his cast in the middle of filming that they were making a musical… no, it’s not. I’ve known a bunch of pagans over the years, and the kind of music this contains, would send most of ’em running. 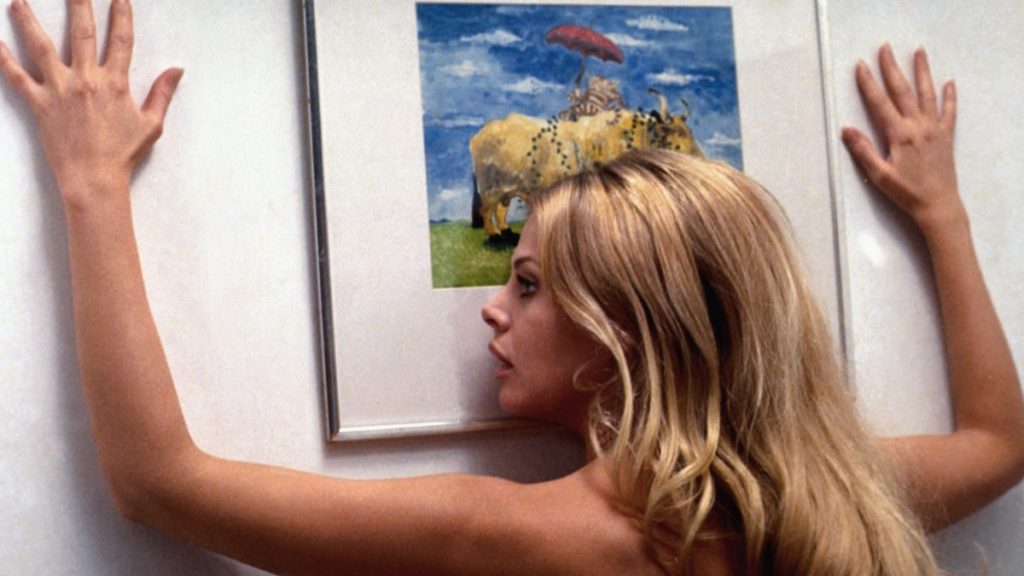 That the film succeeds in spite of this, is testament to the qualities it does possess. Central to these in Woodward’s excellent performance as Police Sergeant Neil Howie, who goes to a remote island in search of a missing girl, only to find a number of things that are deeply unsettling to his own beliefs. The islanders practice alternative religion, which is fertility-based, and Howie is highly unimpressed by the sexual freedom he sees – even when it consists of the landlord’s daughter (Ekland), trying to lure him to pay her a visit. In Howie’s opinion, the educational system leaves a bit to be desired too, and worst of all is his growing suspicion that the missing girl is to be sacrificed at the behest of Lord Summerisle (Lee), a gift to the gods after the harvest failed.

Howie is a man wildly out of his depth, and utterly unprepared: he may not know what’s going on, but what ever it is, he strongly disapproves. Yet, despite that, Woodward makes him a sympathetic character, especially at the end – his expression, when he finally realizes how things will end, is just perfect and the true face of horror. It mixes sex and darkness in a way that is very rare, Most films add it as a exploitative angle (not that there’s anything wrong with that, of course), but here, it’s an intrinsic part of the plot and setting. Lee is impeccable as the overlord, who knows the truth about what’s going on, but finds it expedient to encourage the beliefs. And, while it’s a “surprise” ending, it doesn’t hurt the film a bit on subsequent viewings, as you can then enjoy the way Howie is ensnared by his own actions. Marvellous, and a basically unique entry in British horror.