Good question. I found myself wondering the same thing for much of the running time, and would like to thank the makers for providing such an easy target in their film’s title. Really: fish in a barrel. Even at a scant 78 minutes, this manages to outstay its welcome, and that’s after a brisk opening quarter which promised much more than the film could deliver. The heroine is Blake (McAtee), a writer who decides to head off to a remote cabin owned by the family of her doctor husband, Jack (Browning), and work on her novel. There, she finds herself stalked by a mysterious assailant (Krause) for unknown reasons. That’ll be the title. He has already killed a number of people in gruesome fashion. That’ll be the brisk opening quarter. 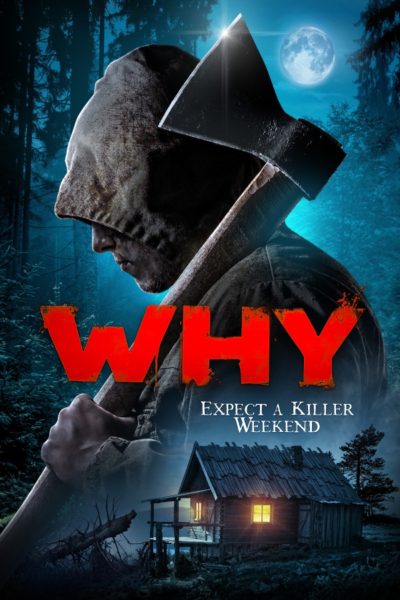 No, really. Inside the first 15 minutes, we get: a) a nurse’s throat slashed in her car; b) a couple having sex in a tent, dispatched by ax; and c) a woman pinned to the wall with a knife and her face removed (top). This is clearly a very busy killer, who has a lot on his to-do list, and does not believe in messing around. Except, as soon as he gets to Blake’s cabin, for the next forty minutes, he just lurks menacingly. Oh, he may tie a dead animal from a tree to put the wind up her, but that enthusiasm and efficiency goes right out the window. All we get is the unimpressively skittish heroine behaving in ways that will trigger eye-rolling, e.g. dropping her phone. Not that it matters since, as is required in this kind of thing, there’s no cell service.

Jack, meanwhile, is making his way towards the cabin at a pace suggesting his ancestors were glacier-inhabiting sloths. He alerts the local sheriff (Lance Henriksen, slumming it – though not so badly as Natasha Henstridge, playing Blake’s agent), who is reluctant to do much. This makes no sense either, since the film already established he is aware both that people have recently gone missing, and of the area’s troubled history. Just do not expect any worthwhile explanation as to the latter, beyond a couple of vague lines between him and his deputy (Janes), who is sent to the cabin.

By the time she eventually arrives, all the goodwill of the gory beginning has vanished. There’s nothing thereafter in the story which you haven’t seen a billion times before, and the characters do nothing to enliven the plot. This all feels like extremely lazy film-making, with the creators doing the absolute bare minimum in terms of the script. This surely cannot have reached more than 30 pages, most of which would have been “Blake runs around, screaming”. There is something to be said for the decent, practical FX we get, which appear to have wandered onto the wrong set. But it’s been a long time since I’ve seen a movie so heavily front-loaded, making the sense of disappointment by the end, all the more weighty.