Over the years, various gimmicks have been used to lure people in to watch a movie. Hardcore Henry was all shot in first-person perspective. Clue had three different endings. But has there ever been a gimmick which has had less discernible impact on the viewing experience? That would seem to be the case here, for the hook is that McAvoy was not provided with a script, just basic plot points. As a result, he was forced to improvise his dialogue and reactions. The results appear to be indistinguishable from what I believe is called “acting” – which leaves me largely wondering, what was the point. Indeed, the same could be said of the film as a whole, considering it’s a remake of Carion’s own, similarly improvised 2017 French film, Mon Garçon. 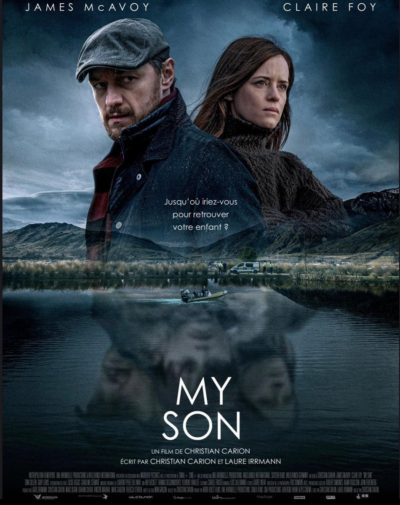 McAvoy plays Edmond Murray, an oil company employee whose son is kidnapped from his bed in the middle of the night, while at a summer camp in the Scottish Highlands. It’s an awkward situation, as his ex-wife Joan (Foy) has moved on. Edmond’s suspicions fall first on her new other half (Cullen), who seems considerably more concerned about his planned new house than his step-son’s disappearance. But things get murkier after the policemen in charge of the investigation (Lewis) tells Edmond he has been taken off the case. There’s also the apparent sudden police interest in Murray’s employers. However, on reviewing phone video, he finds a suspicious car apparently surveilling his son. Will this prove the key to unlocking the mystery?

From there, it descends into a gloomier version of Taken, with the hero chewing his way up the chain towards the perpetrators of the kidnapping. However, it doesn’t feel like the scenario is such as to force McAvoy out of his comfort zone in terms of improvisation. I mean, what level of acting ability is required to yell “WHERE IS MY SON?!?!” repeatedly at somebody, while waving a blow-torch in a menacing fashion? Indeed, much of the second half seems to consist of Edmond creeping around an abandoned lodge in near-darkness, trailing one of the apparently interchangeable bearded Scotsmen (an element which prompted some confusion among the Film Blitz viewing panel).

It’s not a bad concept, slightly similar in execution to The Lost Son, though nowhere as depressing. The performances are also decent enough – Foy perhaps makes the greatest impression, as a mother wracked by guilt over what she feels was an abandonment of her son. The Scottish landscapes provide a suitably brooding, mist-shrouded backdrop for proceedings. The problems here are all on the scripting side, where I can’t help feeling that its entirely deliberate underwritten nature has left the story feeling… Well, underwritten. Who would have thought it? Some elements, set up as important, turn out to be largely irrelevant red herrings, and consequently are a waste of everyone’s time. Maybe the third time will be the charm, and it’ll work when Carion goes to Hollywood in 2025, and remakes it yet again, probably with Mark Wahlberg in the lead role.