One of the things this brings home is how much culture is truly global these days. I’m sure there are bound to be some local references in this horror-comedy which don’t translate. Yet, from YouTube trolls to Netflix hits, there’s a surprising amount referenced here which is entirely accessible to a non-Brazillian audience. The first part of the title refers to the “Ghoulbusters”, a collective of ghost hunters, who are entirely different from a certain fictional squad. As they explain, “The difference is that the Ghostbusters have a ghost in a no parking sign, while ours is in a yield sign,” prompting the sarcastic rejoinder, “So you hunt ghouls, but you yield to ghosts?” 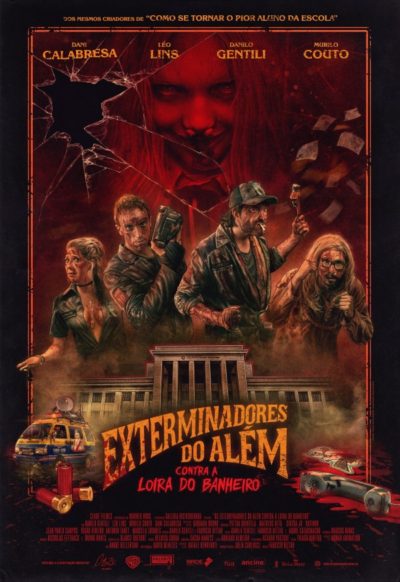 With YouTube views on their channel declining, despite their best efforts to fake it until they make it, they are delighted to be hired to investigate spooky goings-on at a college. They are rather less pleased to discover the genuine, highly malevolent ghost of a young girl in occupancy of a bathroom, summoned by invoking a local urban legend. She’s part Bloody Mary, part Moaning Myrtle from Harry Potter – if Myrtle were capable of both possession and exploding heads at will. They are thoroughly unprepared for this, and have to try and figure out how the restless spirit can be put back into the mirror where it came from, before they are all dispatched, in spectacularly gory ways.

The influence of Peter Jackson is obvious here; if his first film had been The Frighteners, rather than Bad Taste, the results might have resembled this. The enthusiasm is clear, with some apparent rough edges, in terms of plotting and characterization. It could have benefited from trimming, as there are some scenes – indeed, several entire characters – which add nothing to the film, and slow down the pace. This needs to be at Evil Dead II levels, going full-throttle. It does occasionally achieve that, with some spectacularly gory and tasteless set-pieces. The peak is probably when a foetus in a jar gets possessed, and attacks the crew in a range of ways (above), prompting the suggestion, “Find a wire coat-hanger!”

That’s the level at which this operates; if you need another example, one sequence has a security guard attacked by one of his own turds. The sensitive or easily offended should stay well away from this. The more robust viewer will likely find sufficient here to amuse, though there are points at which the fondness for the cheap shock is a little wearing. [None more so, than a post-credit sequence which feels like a throw back to the Internet circa 2004 and “screamer” videos.] Despite leaving savvy viewers on such a poor note, there’s an energy here which is a fair bit of fun. No-one is taking it seriously, and they seem to be having a good time. Do likewise, and you probably will too.