If a film is described as “The best, worst, and craziest horror movie you’ve never seen,” you will have my attention. However, the film then has the task of living up to that description: any one part would be a challenge, but can it truly deliver on all three fronts? The short answer? No. It’s not much more than a moderately inept Evil Dead knock-off. It comes closest in the last, mostly because its various scenes don’t mesh together at all, feeling like three different movies were spliced together at random. The resulting dreamlike quality is probably the film’s best attribute. Unfortunately, I get the feeling this was largely accidental: incoherence rather than deliberate surrealness.

The plot concerns Cory Harman (Larson), who is driving out to the middle of absolutely nowhere with his girlfriend Elaine (Lapensée), after a failed attempt to reconnect with his father ends in Dad committing suicide. Cory is heading to the family farm to get to the bottom of things, and meets up with a group of his friends, most notably the thoroughly obnoxious, even by the low standards of early nineties horror movies, Dell. However, also included in the posse is a karate-kicking magician and his… assistant? agent? gay lover? Could be all three. There’s the usual brush with the locals, most notably Harcourt (Norris). He appears to be a cross between David Carradine and Klaus Kinski, yelling things like “Blood everywhere!” to set the tone, as he warns Corey to stay away. 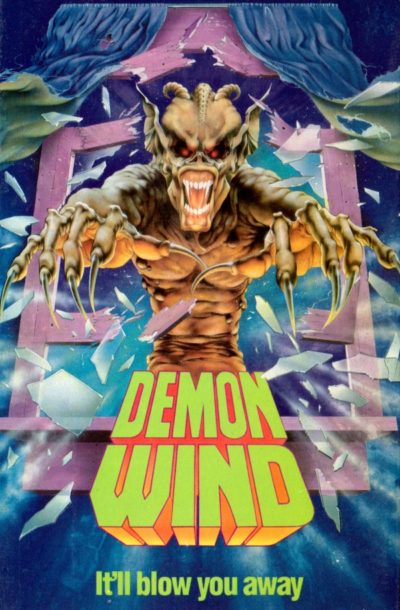 Naturally, Cory doesn’t, and the three-car convoy wends its way even further into nowhere, pausing only for a close-up of a cracked egg full of maggots. “I need to have some answers about who I am,” he says. Before he finds himself, however, they find a cross with a skeleton tied to it, and a skull half-buried in the ground. When Cory touches it, this triggers a flashback. Or a vision. Either way, there were definitely Dutch angles involved. The farm is now a burned-out wreck. “There’s something really wrong here,” says Bonnie, one of Cory’s friends. No shit, Mrs. Sherlock. What was the clue? The door which is an empty frame from the outside, but leads into an actual house? She warns Cory not to go in.

Naturally, Cory does, followed by his friends, who are remarkably unfazed about their apparent entrance into a space which has no business existing. Rattling furniture and, I kid you not, an exploding turkey ensue, and do disturb them enough to get out and try to regroup. However, with all three cars simultaneously suffering dead batteries, they have to set off on foot, pausing only to allow some inexplicable fog to roll around them repeatedly (below), teleporting them to a different location each time. Maybe – I dunno – move out of the way? They end up back at the farm, where a trio of little girls with creepy voices say “You can’t leave”. The Bleeding Obvious Sisters abduct Bonnie and vanish.

Cory manages to persuade the remaining people that staying in the house that shouldn’t exist, is going to be safer than in the car. “I think it’s going to be okay,” he says. Well, that’s me convinced, self-cooking turkeys or not. Once inside, Cory wanders off by himself, and finds his grandmother’s diary which is helpfully specific, “In the bottom drawer of the vanity, you will find two daggers which are part of the sacred set of seven. The other five have been lost. It is written that with all seven, you can kill the son of Satan.” Good to know. It would also have been helpful had Cory perhaps mentioned the connection between his grandfather and Satan worshippers trying to raise the devil, before everyone agreed to go to the farm? Just a thought.

Equally convenient: a shotgun shows up out of nowhere, before a bizarre conversation about how “they do voodoo in Tahiti”. Outside, the fog rolls in, and a topless woman suddenly appears, calling for someone called Stacy, whoever that is. Oh, hang on. It’s the magician’s “friend”. Obvious Demon is Obvious, but that doesn’t stop Chuck and Stacy from going outside. Other demons show up – or maybe it’s just an impromptu Halloween party, it’s hard to tell the difference – and we find that, never mind sacred daggers, shotguns appear to work just as well in the demon dispatch department. Or, in Chuck’s case, roundhouse kicking the head clean off one, before going under the monstrous tide with a cheerful “Fuck you!” 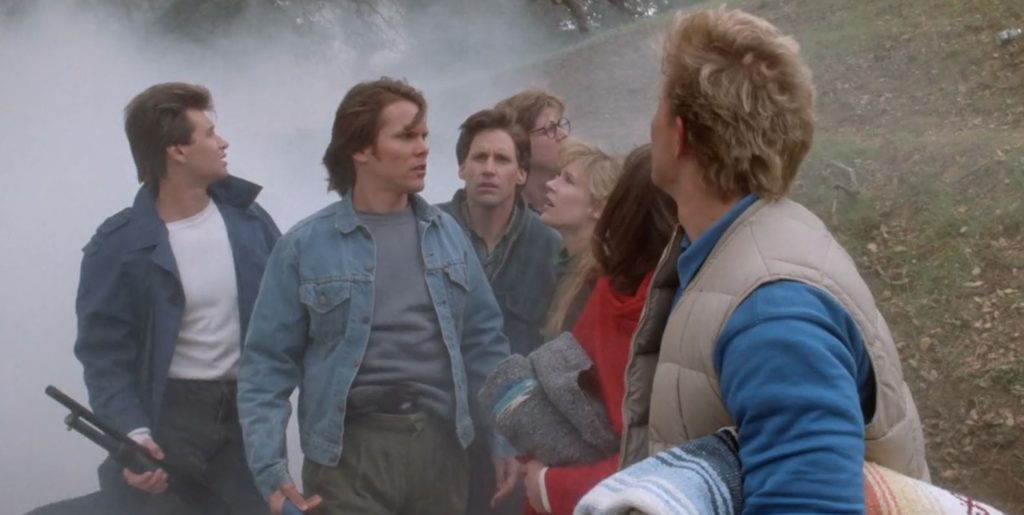 That’s two down, though another car shows up with replacements. Dell and his girlfriend try to leave – that goes about as well as expected – while Cory tries to connect with the spirit of his grandmother. Jack, the group nerd, decides it’s time to go on the offensive, and with a leap of logic worthy of an Olympic medal, figures out the farm’s barn is the center of the occurrences. Cory and the rest of the survivors walk… very… slowly… over to, into and around the barn. Seriously, if you’re not making “hurry up” circles with your fingers, you’re not paying attention. Have some urgency, people. There, they discover something Cory immediately pronounces an “altar to the Devil” – how is he such an expert? – that crunches down on a friend’s head (below). Going forward, I recommend not listening to Jack, m’kay?

Remember those sacred daggers? Finally, Corey does too, and it turns out Granny’s spells still work to protect the house from the demons massing outside. Until they suddenly don’t. Well, that was pointless. Jack gets bitten by one of the demons – that goes about as well as expected, too, ending with him taking the other sacrificial dagger to the eye. The Satanic priest then shows up, looking particularly lumpy, and making pronouncements like “Now this world will be mine.” Not so fast, your ineffable, cloven-hoofed lumpiness. For Corey and Elaine recite a passage from the book, causing Corey to turn into…whatever this is, and kneeing the son of Satan in the crotch.

Then, it turns out, everything that happened after he walked in the front door was all a dream. Or was it? For in a cunning double-bluff (actually, the only point where the film genuinely surprised me), it wasn’t. It all leads to final confrontation between Cory and the son of Satan, as Elaine reads the last spell to send the demon “back into the darkness from where it came.” Er, what happened to that whole “need the set of seven sacrificial daggers” thing? Like so much else in this film, that was an element which made no sense. The spell causes the house – or maybe the son of Satan – to explode in a giant fireball, from which Cory and Elaine emerge miraculously unscathed. And, in the former’s case, with his forehead back to normal size. 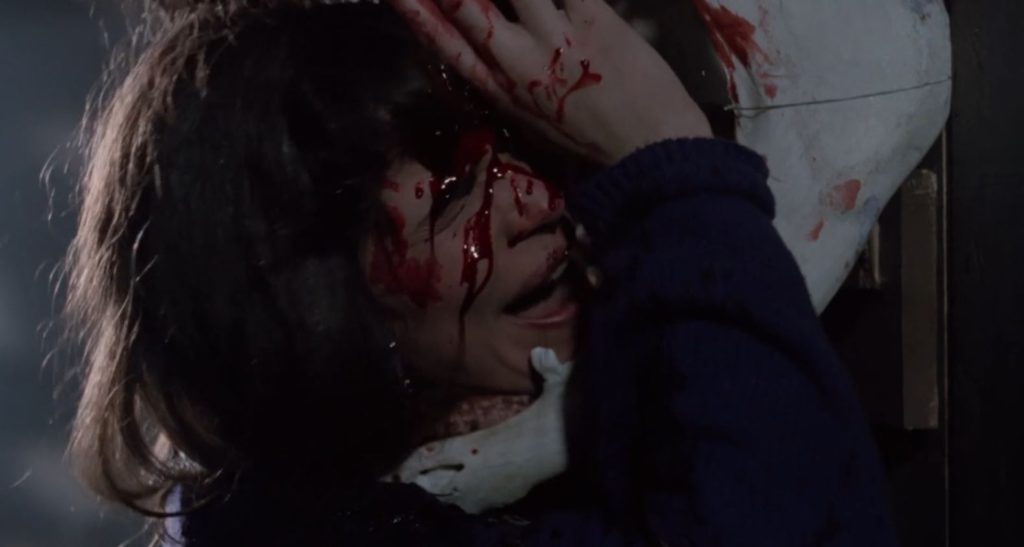 I will say, this is never boring. And the special effects work, especially in the copious use of face prosthetics, is half-decent, suggesting this wasn’t a completely bargain-basement operation. However, it is apparent that nowhere near enough thought went into the script, the characters are uninteresting and the performances forgettable when they aren’t painful. It escapes me quite why this, out of all the spam in a cabin flicks which followed in the wake of Evil Dead, should be deemed worthy of cult status. While easy enough to write 1,200 words on, it’s not one I have any significant interest in rewatching. Life’s too short for mediocrity, and this is the embodiment of it.