“This is Bosnia. These people specialize in fucked-up.” There, I’ve kinda spoiled it for you with that quote, since it’s an effective summary of the whole movie. Still, I suppose I could go into a bit more detail than that. Kathryn Bolkovac (Weisz) takes up a job as part of the UN peacekeeping forces there, as the country seeks to rebuild after a very unpleasant civil war, featuring attempted genocides, mass rapes, etc. She stumbles across a sex-trafficking ring, which is luring young women into brothels. And not the nice sort of brothels either. These are the kind with grubby mattresses on the floor and chains. Worse still, it isn’t just the locals – from whom, as the quote above indicates, the film tacitly expects that kind of thing. Either actively involved, or turning a blind eye to it, are (gasp!) many of her colleagues, as well as other diplomatic entities. And no-one is too happy when Kathryn starts rocking the boat and demanding that Something Must Be Done. 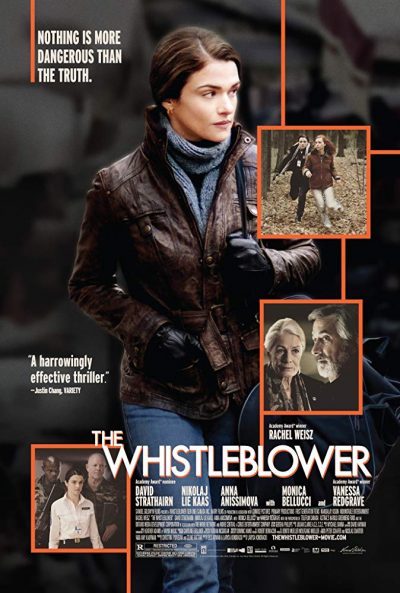 I guess this is an example of the “white saviour” in action. Those scummy Bosnians (be they Serbs or Croats – the film is strictly equal opportunity there) are unable to get their own house in order, until Kathryn rides to the rescue. It’s a template we’ve seen a bit too often before e.g. Silkwood, Erin Brockovich: a story inspired by true events, in which a woman bravely takes on big-scale (and inevitably, male-led) malfeasance. What’s different here – and this might count as another spoiler, if it wasn’t for the historical inspiration – is the sheer pointlessness of it all. For this finishes with the heroine leaving the country and going to the press to expose what she has found, and…

Well, nothing much happens. According to the end-credit scroll, a few people got sent home, nobody got prosecuted and Kathryn became unemployable. But at least she ended sex-trafficking in Bosnia forever! No, wait. I’m fairly sure she didn’t. The viewer is consequently left with no sense of justice triumphing over evil, more one of apathy. Why bother? It may be realistic, but doesn’t exactly make for great cinema, regardless of the obviously good intentions of those involved. I’m just not sure what the point of this is.

As a thriller, it’s flat, mostly because we lack any well-defined antagonist, despite a host of well-known names (as well as those listed above, Vanessa Redgrave, Monica Bellucci and Benedict Cumberbatch pop in briefly, looking suitably serious). Weisz does well enough in a difficult role, and there are moments where the sense of paranoia is well-evoked, with anyone potentially being out to stop her. When it ends though, it leaves me half-wondering if we might have been better off letting the Serbs and Croats tear each other’s throats out in the nineties, then take off and nuke the whole site from orbit, just to be sure. I suspect this is probably not the intended takeaway.