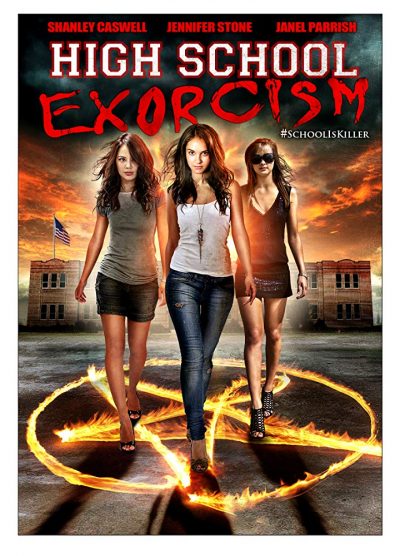 Her best friend, Lauren (Parrish), writes for the school paper and has just done a piece on its Christian group, “The Chosen,” which operates under queen bee Olivia (Caswell). And, wouldn’t you know it, the group has connections to a priest who does exorcisms (McNamara)! However, after he declines to carry one out on Lauren, because she doesn’t meet his strict criteria, Lauren and Olivia decide to go ahead anyway. What could possibly go wrong? Sadly, the answer is not nearly as much as you’d expect. Without spoilering it too much, let’s just say, the mental issues here might not entirely be limited to Lauren.

This is so restrained, I had serious doubts about checking the “horror” category here. It has the ingredients you’d expect, it just seems to bake them in a way that the end product tastes completely different, and certainly doesn’t resemble the product on the packaging, that promises something closer to The Craft. I can think of any number of ways this could have been more interesting. Lauren being possessed by Satan herself, bringing on the Apocalypse, raining fire and brimstone down on the world. That’d have been neat. Or for the DIY exorcism to go horribly bad, leading to all The Chosen being possessed as well, so they go all Mean Girls on everyone in their school. Hell, add a few songs and call it High School Musical Possession.

Instead, the only pleasures to be found here are small ones, such as seeing Lauren investigating a priest’s PC, and finding a folder conveniently named “Exorcism Applications” on it. I guess that’s what .exe means. Though I am impressed by her loyalty, considering Chloe’s sleeps with Lauren’s boyfriend at a party (or, at least, that’s what’s implied: we are talking TVM here, so it’s really just a case of them both leaving the same bedroom, fully clothed. Supposedly rated R, I have severe doubts). If my best friend pulled that shit, she can deal with her own demonic possession, thank you very much.

In its marginal defense, the performances are decent enough, and stop it from collapsing entirely, with the three leads managing to avoid becoming annoying teenagers, even the God-botherer. There are also some moderately-known names, in Ione Skye and Kelly Hu, playing moms, which is probably an ironic comment on the passage of time. Stumble across this in its natural habitat i.e. free TV and it might just pass the time.