University swimmer Haley Keller (Scodelario) defies a hurricane evacuation order in Florida, and goes to check on father, Dave (Pepper), who isn’t answering his phone. After not finding him at his apartment, she picks up his dog and heads to their old family home, which he was renovating. Helped by the pup, she locates Dave, injured, down in the crawl space below the house. This is a) rapidly flooding due to the storm, and b) now inhabited by multiple large alligators, which made their way in through the storm drain. Haley is going to have to deal with both these issues, before she and her dad become part of an ongoing buffet. 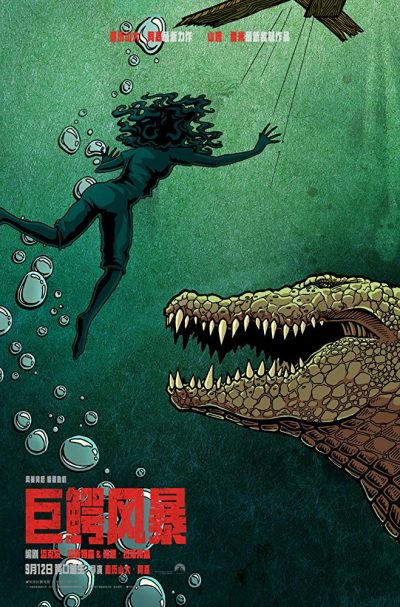 It’s a tale as old as time, and Aja doesn’t interfere much with the simple and straightforward nature of proceedings. It does require a bit of contrivance, and I have issues with how Haley doesn’t immediately call for help on finding her father. Also, I kinda got the impression that when an alligator bites you, you stay bitten. While that’s the case when they attack the NPCs here, the mostly limited nibbling done against Haley and Dave appears to reflect a significantly better armour class. Perhaps they are both wearing rings of +3 Protection Against Reptiles.

However, for the most part, it’s effective and well-crafted. Obviously, Haley’s aquatic skills prove crucial, though similarly, I am pretty sure even Michael Phelps could not out-swim a well-motivated and hungry ‘gator. Aja does a particularly good job in two areas. Firstly, in crafting the storm-tossed landscape. Chris spent a bunch of years in Florida, lived through a number of hurricanes, and she was impressed by how accurate is the depiction of conditions here (even if Serbia stood in for Florida!). Secondly, the creatures themselves. I don’t know if they were CGI, practical or a combination of both, but they certainly do the job.

Aja’s background is in horror, and that’s apparent. I wonder if the scene where the storm pushes a tree-branch through a window was his nod to The Evil Dead, directed by Sam Raimi who’s a producer here. More generally, that informs how the alligators are used, with the animals little or no different from a reptilian take on Michael Myers. They prove virtually unkillable, can’t be reasoned with, and only show up when dramatically necessary. This works best when you treat it, if you like, as a swim ‘n’ slash (rather than stalk) film, with all the tropes, both positive and negative, associated with that.

On that basis, the background is perhaps a little excessive, and I could have done with seeing some more early mayhem instead, to establish a baseline for the potential carnage. Dammit, have the alligators menace a stranded bus full of cheerleaders on their way to Dave’s house, or something. That said, as a cross between a monster movie and a home-invasion film, this proves solidly entertaining, repeatedly teasing the heroine’s escape before sloshing her right back into peril again. What more could you want?