Single mom Kara (Roberts) moves with her two kids from the city to the country to take up a new job as caretaker to elderly recluse Walter (Davison) and his collection of relics from all around the world. Not all of which may have been acquired legally, and some of which have spiritual significance, as we find out in a prologue. His latest acquisition is related to a legendary African giant spider: The Black Egg of Maa-Kalaratri. Yeah, not sure I’d want something with that name on my mantelpiece, unless it was made by Fabergé. And you can probably figure out what happens from that alone, perhaps with a little assist from the cover. 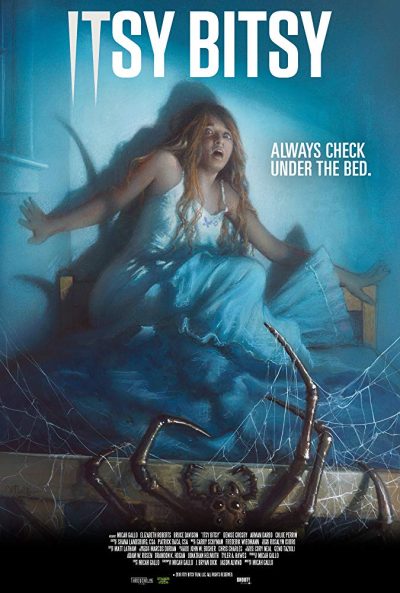 The movie does take a while to get there, as we get what seems largely like padding, in the form of Kara’s issues. For she is, as Chris succinctly put it, “a shit Mom.” She has a substance-abuse problem, apparently caused by post-traumatic guilt over a previous dead child. And Kara leaves her kids alone while she wanders off into town for no reason, to mope in the diner and listen to buck-up speeches by the local sheriff (Denise Crosby). To his credit, son Jesse (Darbo) does call her out on her negligence: “That one job you’ve given me, it comes with a whole lot of other things, that you should be doing but don’t want to!” Meanwhile, the audience are left gently drumming our fingers, as moppet Cambria (Perrin) bounces around the spooky old house in her butterfly wings, looking every adorable inch the perfect snack for a hungry arachnid.

Eventually, we get to the meat of the matter – even if the remarkable spider is apparently able to a) operate a cell-phone jammer, cutting Jesse’s call off in mid-sentence, b) turn all the lights off, and c) lock the doors in the house. [Really, should giant spiders ever develop the ability to use tools, we are so fucked] If you can put all semblance of credibility aside, this does have its occasional moments, helped by the makers’ relying heavily on practical effects, rather than the CGI with which many low-budget productions would cop out these days. But it largely dies on the vine of a heroine who is neither likeable nor interestingly unlikeable.

Instead, Kara occupies an unfortunate middle-ground of being largely irritating. You suspect the film would have been better off not trying to give her any background at all. The attempted character arc of her eventually taking responsibility for her kids – the failing to which Jesse alluded – sputters out unconvincingly, in a case of too little, too late. The ethnic angle seems under-developed too, and is largely irrelevant or ignored after the opening quarter. The makers forget that there’s no real need for complex mythology or world-building when you have a frickin’ giant spider. If you’re going to go that route, you might as well open with a 15-minute TED talk on why the square-cube law does not apply to your creature. And nobody will be sitting around for that.