It’s quite startling that, more than twenty years after Pulp Fiction came out, film-makers are still putting out movies which shamelessly copy the fractured timeline and low-life “characters” of Tarantino’s work. Perhaps I’m jaded, having always felt Pulp is incredibly self-indulgent and over-rated, and so the steady stream of Quentin wannabees since 1994 has generally been about as appealing as a dose of crabs. That said, this isn’t… terrible. I watched it, and only occasionally felt the urge to reach into the screen and smack the characters silly. That’s a considerable improvement on Pulp Fiction, at least, where I couldn’t hear a line of dialogue, without imagining its director’s coke-twisted rat-face squawking the dialogue. 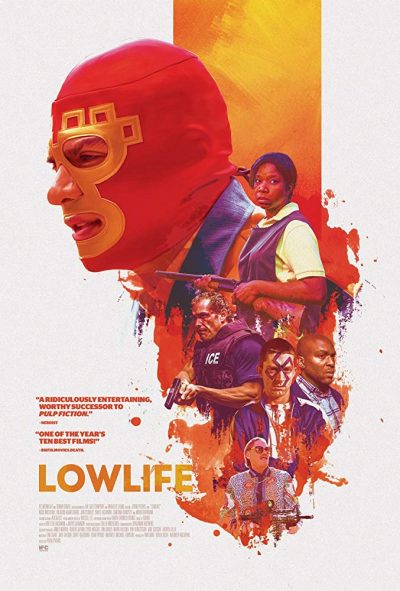 Yeah, I do not like Quentin Tarantino. Moving on.

The focus – such as it is, since the film spreads itself about – is on a handful of main characters. Perhaps the most central is low-rent motel owner Crystal (Micheaux), whose husband desperately needs a transplant. To this end, she contracts with thoroughly sleazy crime boss Teddy “Bear” Haynes (Mark Burnham). His enforcer is a masked luchador called “El Monstruo” (Zarate), prone to hyperviolent blackouts. Tasked with getting the unvoluntarily donated organ – whose source leaves neither El Monstruo nor Crystal happy – are Randy (Oswald) and Keith (Ogbonna). These are two fairly inept dudes, the former of whom just got out of jail with a large swastika tattooed on his face. This does not fit well with his persona. Or anyone else’s.

That last element is a fairly good indication of  the solar system in which we are orbiting, skating over the boundaries of good taste in a variety of ways. Events are also cut-up, unfolding from multiple perspectives and at different points, before everyone eventually ends up in the same room at Crystal’s motel. It’s an odd mix of styles and approaches, which doesn’t quite manage to gel into anything particularly engaging or coherent. The characters feel as if they are inhabiting different movies, and the resulting interactions are awkward. That said, they all have their interesting aspects: El Monstruo feels so fully developed as to merit his own feature. I’ll admit also to laughing out loud, when someone passes comment on Randy’s tattoo, and he spits back, “You don’t know my struggle!”

This almost schizophrenic nature may be an inevitable result of this being the product of comedy collective Tomm Fondle [a name I initially thought was just a particularly unfortunate personal one!]. While Prows is the name on the director’s chair, I suspect there was a fair amount of creative input given to other members. That may explain why the end product feels like it’s perpetually getting pulled in a number of different directions, from black comedy through social commentary to thriller. It doesn’t qualify as an unmitigated success as any of them; then again, not does it completely fail, either. It’s probably significant that some impressively well-made corpses are the sole element likely to stick in my mind.