This is a feature-ish (69 minute) compilation of a six episode web series, out of the Czech Republic. It’s about three college students who share an apartment, each of whom suddenly and mysteriously find themselves afflicted by a bizarre syndrome. Sofie (Schollerova) turns any clothes which touch her invisible, meaning she effectively goes around naked. Viki (Hodíková) is repeatedly attacked by her shadow. Meanwhile, Robin (Banga), can’t speak above a whisper or he blasts the ear-drums of everyone in the room. These three weird ailments explain the odd title of the film, which it what caught my attention – it’s mostly about their efforts to come to terms with and/or find a solution to their situation. 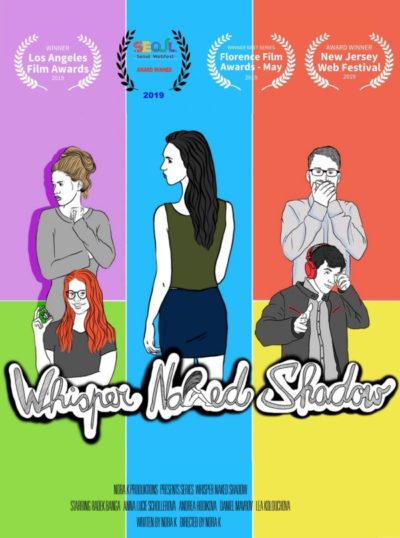 It’s certainly unusual, and deserves some respect for that. The problem is, it appears the writer/director had no clue what to do with the characters, once the circumstances had been established. Nothing at all is resolved over the span of the hour-plus here. Well, Robin gets better, with as little explanation as there was for his voice becoming ultra-loud to begin with. But it ends on a cliffhanger, which perhaps makes better sense in a web-series, especially since there is word of a second season. However, as a stand-alone experience, the way I watched it, the results are rather unsatisfying.

I think there may simple be too much going on, with the effect being that none of it gets adequately developed, at least over what we have here. Just give us one of the three syndromes, and provide a decent arc with that, including getting it tidied up properly. Then, maybe have the second one show up at the end of the season, as a lead-in to the next series. Viki’s is perhaps the one which has most potential. At one point, they get in contact with a priest to ask about an exorcism, and that could have become a significant thing, instead of just a couple of Skype calls. Instead, we get largely irrelevant subplots, such as Sofie’s exploits as a sugar-baby. That said, watching her wander about naked is not exactly a chore. 69 minutes of that would have been reasonably tolerable, I guess.

On the other hand, the characters here are all quite likable, and I was amused by the matter-of-fact way everyone reacted to their bizarre situations, and simply buckled down to deal with it. There is an odd angle where Robin seems to suffer some kind of discrimination; I think he’s a Romany? I’ll assume this is a meaningful thing in the Czech Republic, but is an element that doesn’t travel well, especially given the lack of explanation. However, the rest was quirky enough to keep me adequately entertained, at least up until the point I realized that the creators hadn’t so much painted themselves into a corner, but had decided not to bother with old-fashioned notions like corners altogether. It’s the kind of thing which makes me reluctant to commit to watching any sequel.