Half the battle of doing a low-budget movie is coming up with the right idea for your resources. It’s surprising how many aspiring film-makers forget this, and end up over-reaching themselves. If you cannot stage a credible zombie apocalypse – and these days, half a dozen mates in Halloween masks doesn’t count – then do not write a zombie apocalypse. CGI is another area where ambition tends to cause more problems than it solves. You are not Game of Thrones. But use CGI and you will be compared to them, and found wanting. Fair? Of course not. Inevitable? Probably.  Generally, the simpler you can keep things, the better. This is where Devil knocks it out of the park. A single, easy controlled location, a cast of four main characters, plus storyline choices and directorial decisions minimizing the need for visual effects. 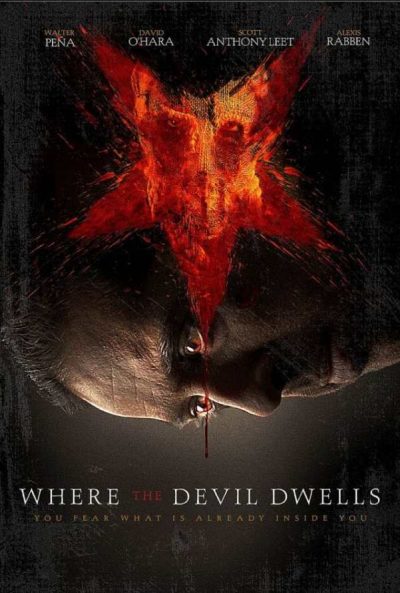 The main player is Lenard (Peña), whose father, Oren (O’Hara), was an infamous serial killer called ‘The Butcher’. He was supposedly shot and killed by cops in the Florida Everglades, leaving the son with his own mental issues. He just finished a stretch in an asylum, having attacked a waiter in the belief the server was part of a Satanic cult. Lenard has just been released, and had returned to live in the cabin owned by a recently-deceased uncle, and work on a children’s “Choose Your Own Adventure” book. The terms of his release require him to wear an ankle bracelet and, basically, be under house arrest. This is strictly monitored by the local sheriff (Leet), so to help out, Lenard hires local girl Mitzi (Raben) to get his groceries, medications, etc.

Of course, it isn’t long before the weirdness starts. A dead deer is left at his door. The local newspaper reports Satanic sacrifices, and a tree outside the cabin is marked with a related symbol. It’s gone by the time the sheriff shows up. [I should mention the film is set in 1989, which was during the “Satanic panic” era] He finds a hidden room, showing his uncle had his own “unusual interests”, shall we say. Then the real kicker happens: the supposedly dead Oren shows up in the cabin. So, is this simply an indication of a psychotic episode, and Lenard is having a relapse? Or is it possible the cops failed to kill Oren, then covered this up as a convenient way to close the case?

The lack of visual effects works for the film, since there is absolutely no difference between “reality” and those aspects about which the audience is left in doubt. Both look and feel the same, which puts us on the same footing as Lenard – completely unable to tell the difference. The other big plus here are strong performances, from Peña and O’Hara in particular. The former makes a potentially tricky character sympathetic; the latter looks and acts like Michael Madsen after a three-week bender, which is not inappropriate. Actually, while I’m there: Peña himself, is similar to Gregg Grunberg, and Raben resembles Emily Perkins, a.k.a. the one who wasn’t a werewolf in Ginger Snaps.

The house arrest angle is a little contrived, and it’s never explained clearly why Lenard is forced to stay in a place with such obvious emotional baggage. Was mental health care that primitive in 1989? It’s probably also fair to say, the movie’s best when exploiting uncertainty. Like most of its kind, eventually forced to get off the fence, the resulting conclusion is somewhat underwhelming and cliched. However, that’s as much a testament to the solid work put in, up until this point. As a disturbing portrait of mental illness, this is certainly the equal of many movies with far greater resources.