Not to be confused with the Werner Herzog film of the same name. However, confusion will likely be a significant part of the viewing experience. Indeed, thanks to this one, I had to introduce the “WTF?” category, because nothing else seemed to fit it entirely. I also slid it into SF, because there’s elements of that, in its portrayal of a Barcelona all but deserted after some unspecified calamity. In this city, one of the few remaining inhabitants is Gim (Gimpera), a fashion model. However, it appears someone is out to kill Gim, having previously killed another woman, and JJ (Marti), the agent of an unspecified organization, is assigned to protect her. 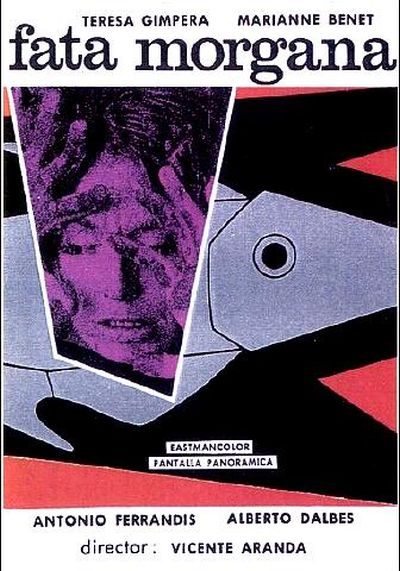 Meanwhile, there’s a professor (Ferrandin), who is lecturing on the topic of victims, who believes that some people are simply fated to be prey for the predators. To quote one of his presentations: “I have carefully selected the following photographs, for their portrayal of distinct victim characteristics. These are beings whose natural vulnerability renders futile any self-defense, and who invite upon them a violent crime.” Well, it was the sixties, folks. There wasn’t any Tumblr or Twitter to call down the virtual lynch-mob against such flagrant victim-blaming. There’s also a group of five young men, who seem to be Gim’s fan-club: we first see them extracting her image from the billboard, with the aid of a jig-saw. And Gim is somewhat in a relationship with Alvaro, triggering the jealousy of the mentally-ill Miriam (Benet), who went off the edge after the death of her husband. Who will be Gim’s killer?

I hope you’re not expecting the film to tell you, because it deliberately obscures any such information, along with a great deal else. For example, it begins with a caption, “This story takes place after the event in London.” What event? Who can say? And it’s not mentioned again until a further caption at the end: “And then the same thing occurred as in London.” In the same way, the cause of the evacuation is kept in the dark; we know about it simply due to the loudspeaker van making an announcement – at least, before it switches over to chatting up Gim! This kind of deliberate obfuscation would normally be maddening in the extreme. Yet, given the severely dream-like nature of proceedings, you simply take it all as part of the package, and go with the flow. There’s no alternative.

That said, it’s a film which does struggle under the weight of its own artistic pretensions. It opens with a sequence of comic-book panels, that suggests it’s aiming for one of those sixties adaptations, perhaps along the lines of Modesty Blaise, which came out the same year. But it’s a conceit that’s soon abandoned, and thereafter provides not much beyond enthusiastic efforts at generating atmosphere. These are largely successful, true enough, and there was something about the Professor’s pronouncements that reminded me of Brian O’Blivion from Videodrome, with which it shares a similarly surreal and dystopian feel. However, that had both a much tighter handle on the script, and better performances. Here, barely any emotion ever appears to register on Gimpera’s blandly expressionless face, and it’s likely the same lack of impact will be felt by viewers here.