Still trying to figure out the moral of this one. Is it depicting the bad effects of unchecked, rampant xenophobia? Or is trying to tell us that most foreigners want to kill us? I’m so conflicted. Regardless, it’s a fairly effective action vehicle, particularly enlivened in the early going by Brosnan as Hammond, an employee of what Wilson calls “the British C.I.A.” Given Pierce’s past history, there’s an obvious, 007-shaped elephant in that particular room. Wisely, he chooses not go that route, instead going for a character who comes over something like Ricky Gervais playing James Bond. I’d have enjoyed seeing an entire film based on Hammond and his exploits, along with his Kenny Rogers obsessed side-kick (Boonthanakit). 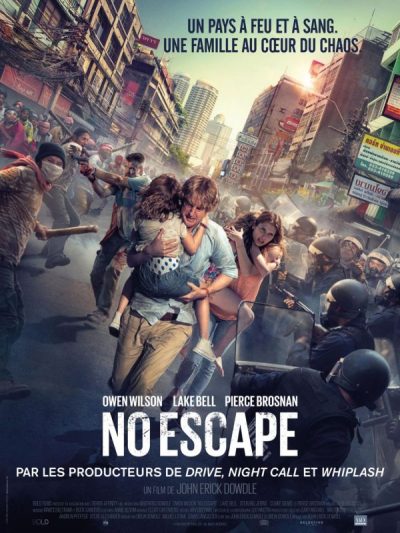 Instead, however, what we get mostly focuses on Jack Dwyer (Wilson), his wife Lucy (Bell) and their two young daughters. Jack has just accepted a position with an engineering company in a (specifically non-specific) South-East Asian country. But on arrival with his family, barely has he checked into his hotel, when a coup breaks out. The rebels are particularly attacking foreigners, in the belief Western corporations are literally squeezing the country dry, through control of its water supply. [If I recall, wasn’t that also the plot in the largely sucky Bond flick, Quantum of Solace?] The Dwyers, with a little help eventually from Hammond, have to figure out how to survive the initial onslaught, then how to escape their perilous situation.

It works best when it’s a cinematic shark, relentlessly moving forward in search of new carnage. This likely reached its peak when the family need to cross an urban chasm, which involves Jack literally throwing his little moppets from one side to the other. It’s the kind of horrific decision which really brings home why we’re glad our kids have grown up and become adults, without the need to throw them from rooftops in some remote country (that certainly isn’t Thailand at all, dear me, no). Whenever it pauses for breath, however, it’s much less effective, not least because the longer it goes on, the more you realize the Dwyers are immortal. When you figure out their increasingly-distressed tourist clothes are apparently made of Kevlar, a good chunk of the sadistic pleasure to be found during the early going here evaporates.

Wilson and Brosnan do a good job of keeping the frantic proceedings grounded. They put a human face on what might otherwise be largely indistinguishable from a “fast zombie” flick, with Asians (generic, and absolutely not Thais in any way) replacing the running dead. All it’s missing is someone being bitten by a local and turning into one of them. Wouldn’t actually be much more silly, than the climax to which this eventually builds. The irony of Americans fleeing to Vietnam was certainly not lost on me, though given the unsubtle nature of everything else, this may have simply been happenstance. Best forget or ignore entirely whatever politics and social messages are being attempted here, and simply treat this as a chase film with low ambitions and few moral scruples. On that basis, it’s decent enough to pass muster.