This starts in briskly entertaining fashion, with a flashback, shot in grindhouse style. This depicts a young girl finding her parents, then her boyfriend, brutally butchered in their house. We then return to the present day, where scream queen Debbie Wilkins (Rochon) is being replaced by her producer Peter Burgess (Gulbranson), in both her professional and personal capacities – if you know what I mean, and I think you do. She doesn’t take rejection well. We next see her arriving on the location shoot for his film, Bayou Butcher. This is about to get underway, in an abandoned hospital, tended by simple-minded custodian, Norman (Quihuis). Debbie tells cast and crew the producer is “unavailable”, but to go ahead with shooting anyway. For Debbie has no interest in going quietly into unemployment, and will dispose of anyone she perceives as a threat. 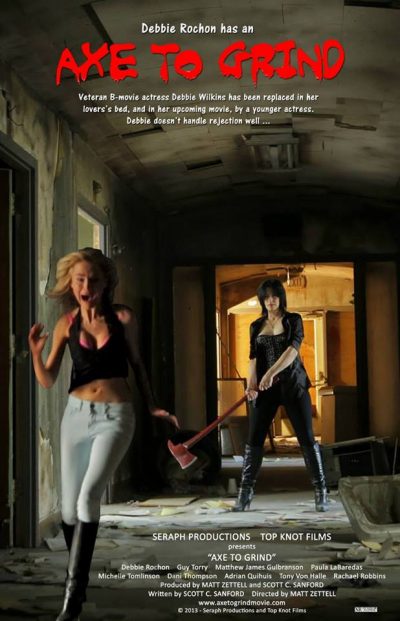 The early going here is entertaining, with a tongue-in-cheek approach which promises much. For instance, the various starlets are introduced by their stereotypes: Horror Film Barbie, Bodacious Brit, Mistress Mayhem and, for Debbie, The Meryl Streep of Horror. These come complete with faux filmographies, including titles such as Exorcist Nymphs, or one I particularly wish was real: The Human Octopus. Unfortunately, this self-aware aspect almost entirely evaporates at this point, and what you’re left with is a mundane slasher. There’s not even any suspense, since we know all along who the killer is; the script doesn’t make even a token effort at concealing this. The kills are blandly unimaginative, and the whole “film within a film” concept is probably over-played too.

A couple of things do prevent it from imploding entirely. One is its location, in the well-known Linda Vista Community Hospital. It has been closed since 1991, and since then has been used as a backdrop for films, TV series and music videos, for everything from Buffy to Pearl Harbor. The facility is now on the National Register of Historic Places, and gives additional atmosphere simply through sheer history. Of course, best not dwell on why anyone would use it to film a movie called “Bayou Butcher” [to the film’s credit, this is actually brought up. The answer? It’s cheaper. Fair enough.]

You won’t be surprised to hear the other plus is Rochon, for she has effortlessly stolen scenes in better movies than this, e.g. Dorchester’s Revenge. She acts on an entirely different level from everyone else in the film, delivering lines as if receiving direction from a spitting cobra, packing each one with venom. That’s particularly true of the scenes we see in flashback while things unfold at the hospital, depicting what happened after she took Burgess hostage in his home. If you’re a devoted fan of hers, there’s enough Rochontastic moments here to justify its existence. Beyond that group, however, the pickings are likely slim as far as cinematic pleasure goes. Outside of her, this is mostly an exercise in diminishing returns, its sprightly early pace proving unsustainable.